The film delineates the journey of a crazed man who awaits another cyclone to be reunited with his family lost under the sea.

Nila Madhab Panda’s Kalira Atita, based on the true account of a madman who appealed to the filmmaker while he was shooting the documentary Satavaya to take him to the sea so that he could be reunited with his family lost in a devastating cyclone in Odisha, offers both an immersive and unsettling cinematic experience.

A fine blend of fiction and the documentation of the villages that have been submerged by the cyclones that routinely hit the Odisha coast, Kalira Atita gives us a glimpse of an impending doomsday scenario when humans, drunk on the ambition of taking civilization forward, will find survival increasingly difficult owing to the harrowing consequences of climate change.

Almost a one-man-show film, Kalira Atita features Pitobash Tripathy as Gunu, a man who has gone insane with the guilt of not having taken adequate care of and responsibility for his family. His family, along with their entire village, was washed away by a devastating cyclone. Years later, the eccentric Gunu returns to the area at a time when another cyclone has been predicted and villagers are being evacuated to safety.

Gunu goes against the swarming crowd heading towards the evacuation spot, in an attempt to be reunited with his family lost under the sea. Trapped in his own hallucinatory trauma, he continues to hear the voices of his wife, daughter and an elderly figure who often speaks for Gunu’s state of mind.

The audience might get chills down its spine anticipating Gunu's inevitable doom as he traverses through the destroyed landscape with an undaunted spirit. Gunu collapses and gets bruised and hurt, but he continues his journey with his only companion, a radio set that continues to provide updates about the status of the cyclone.

The visuals of his incompetence from the past are juxtaposed with Gunu’s hallucinatory imaginations of his happy association with his family. However, the visuals begin to hit hard when Gunu struggles to survive so that he can prepare to be devoured by the approaching cyclone. His hunt for food like a savage is a prophetic statement by the director to make us aware of the devastating effect of climate change around the world.

The first few minutes of the film contain most of the dialogues. In the rest of the film, cinematographer Nagraj M Diwakar follows Tripathy on his frenzied quest while documenting the stark reality of the devastated coastal region. The beautiful theme tune by Daniel B George blends well with Gunu’s surreal world and the raga-based tunes on the flute magnify the sombre mood.

Tripathy has carried the narrative aspect of the film on his able shoulders with a consistent performance. His eccentric facial expressions and reckless body language never once make the viewer doubt that he is in a trance. 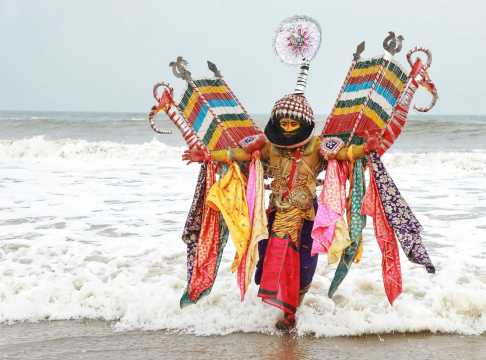 Each and every moment of Gunu’s journey is visually significant and meaningful, thanks to the editorial team of Arjun Gourisaria, Paramita Ghosh and Sangram Kishore Lenka; however, the film still demands a lot of patience and investment of one's attention as there are not many dramatic shifts in the narrative, neither are there dialogues or twists to keep the audience engaged.

At the same time, Gunu’s passionate drive will make you witness his journey till the end as he loses the last trace of connection with civilization when his radio battery dies. The advancing cyclone takes its apocalyptic form to remind us that the environment has already been damaged. The inevitability of the destruction reminds us of Odia poet Achyutananda’s prophecy of the sea entering the Puri temple in the near future. The ample references to Odisha's folk culture are testament to the director's close connection with his roots.

Though the film is based on a true account, with an eccentric protagonist who goes in the opposite direction as civilization, Panda has been able to delineate the phase from one cycle to another and successfully captured the magnitude of its destructive outcome as well.