Kaappaan review: A dull, long-drawn action film with no soul

In spite of Suriya’s earnest efforts to keep the film afloat, Kaappaan ends up as a miserable attempt that’s not worth even a single cheer.

KV Anand’s Kaappaan (2019), unlike his previous outings such as Ayan (2009) and Maattraan (2012) with Suriya, isn’t a film the duo can be really proud of. It’s easily the weakest film to have come out of their combination and that’s putting it mildly.

Anand sets up Kaappaan as a fast-paced action film on the lives of officers of the Special Protection Group (SPG) who dedicate their lives protecting VIPs like the prime minister of a country. Instead of making a gripping story of deceit and revenge, Anand chooses to water down the seriousness of the subject with a needlessly boring subplot involving the plight of the farmers and corporate greed.

The film opens with an assassination attack on Indian prime minister, Chandrakanth Varma, played by Mohanlal in Delhi. With the help of his security personnel, he escapes unhurt, but makes up his mind to find out who’s behind the attack. Soon, we are introduced to Kathiresan (Suriya), an intelligence officer who also doubles up as an organic farmer in a small village in Thanjavur.

Kathir is handed over the responsibility of investigating the attack on the PM, and he’s doing all this while delivering a (boring) lecture on organic farming to a local TV reporter. Kathir, who manages to find a lot of intel on the attack, soon gets deputed as officer in the Special Protection Group. 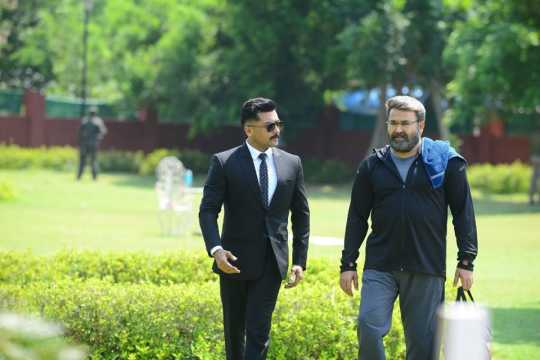 Kaappaan would’ve been a lot more enjoyable if the focus was on building on the action side of the story. Instead, most of the second half is wasted on exploring the done-to-death miserable lives of farmers due to corporatization. At one point, the film itself isn’t sure if it wants to be an action film or a message drama on why farming is a service and not a profession.

This is the second time in a row Suriya has played an organic farmer after NGK (2019). Let’s not be surprised if he chooses farming over acting in the next few years going by his choices of scripts lately.

The film boasts of acting talents like Mohanlal, Samuthirakani and Boman Irani, but unfortunately none of them make an impact with their performance. Mohanlal as the PM is a major miscast and he bores with his speeches of patriotism. Samuthirakani as an SPG commando has very little to contribute other than following Suriya’s orders and passing double meaning dialogues in a silly scene.

Boman Irani as the antagonist is no longer a surprise because it’s so easy to guess his character by the way it’s written in Kaappaan. Sayyeshaa is also reduced to a silly heroine who has to look good and dance for the sake of entertainment.

In spite of Suriya’s earnest efforts to keep the film afloat, Kaappaan ends up as a miserable attempt that’s not worth even a single cheer.