The charming actor skilfully lends a touch of realism to this surreal tale, which is based on a true story.

It is hard to judge a film when the events that inspired it are far more surreal, dramatic and perhaps, in hindsight, funny. The story of the individual upon whom the film is based, Lal Bihari Mritak, is evidence of the twisted workings of the bureaucracy that runs India's key systems of government. Its errors, flaws and loopholes, which are exploited by the corrupt, are as much a part of India's story as its successes. And so is the story of Lal Bihari.

Satish Kaushik dramatizes this tale through Bharat Lal (Pankaj Tripathi), a kind and humorous bandmaster in the tiny village of Amilo in Uttar Pradesh's Azamgarh district. In 1977, Bharat Lal is bedevilled by a rat who loves feasting on his bandmaster uniform. However, his real problems begin after his wife, Rukmani (Monal Gajjar), urges him to a business loan.

When he decides to pledge his ancestral land as collateral, he discovers that he has been declared dead ''on paper'' by his relatives in collusion with a clerk. Thus begins Bharat Lal's lifelong struggle to declare himself a living being. By hook, crook, elections and the law, he tries his best to overturn what was written by a lowly government clerk, but to no avail.

He goes from the sarpanch to an independent politician to kidnapping his nephew, insulting a judge, and even fighting an election against Rajiv Gandhi. Yet, the scheming bureaucracy refuses to sign a paper declaring him alive. As Brijendra Kala's character, an empathetic judge, says, "I won't arrest him, and neither will any other court." The system refuses to acknowledge the error. Hence, this glitch goes uncorrected.

Kaushik's film is built on the quirky, funny, and immensely relatable performance of Tripathi. The charming actor skilfully manages to lend a touch of realism to the most surreal and absurd tales. In Kaagaz, he brings all of his powers to the fore and succeeds.

He is supported well by Gajjar as the subtle Rukmani, who is often exasperated with her husband. Both artistes play well off each other, although Tripathi is present in practically every scene of the film. 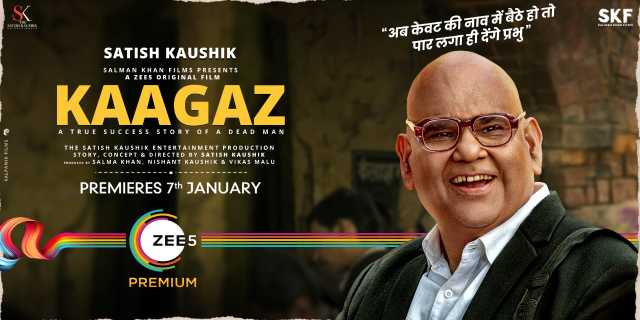 Kaushik, who is the film's narrator, has a walk-on part as Bharat Lal's lawyer, Sadhoram Kewat. It is the former role that gets a little cheesy. There is very little need to explain every dramatic moment in a film that is so linear and clear. There is a neat use of symbolism throughout the film such as the mousetrap in the beginning and a funeral procession in the end.

The other problematic element is Kaushik's tendency to dwell on certain moments that drag the story.

The screenplay, by Imtiyaaz Hussain, Ankur Suman and Shashank Khandewal, builds a linear tale that is sprinkled with some fantastic moments. No line captures the absurdity of the story like the sarpanch reminding Bharat Lal, that even Brahma cannot overturn what a bureaucrat has written down. The story, however, is burdened by the presence of too many characters who have dwindling parts. It also ends on an unexpected whimper that fails to meet expectations.

Mita Vashisht, as the MP who is using Bharat Lal as a political stepping stone, is quite good. So is Neha Chauhan as Sonia, a reporter who takes him to the international stage. Amar Upadhyay remains a poor casting choice for a role that required a coarse roughneck.

Pravesh Mallick's music adds the right touches to the story's poignant moments. The only exception is the loud item song in the middle. The poem by Aseem, narrated by Salman Khan, adds flourish to the tale.

Kaagaz peeks into the world of villagers whose lives are ruled by clerks, government officials and corrupt policemen. They live in the same democracy as us but live in constant fear of the system. Even in the 21st century, the majority of them, like Tripathi's character, are beholden to a system that uses and dismisses people at will.

Kaagaz is available for viewing on Zee5.