Jhimma review: Long-drawn but entertaining film that follows all the clichés of the genre

The biggest strength of this film directed by Hemant Dhome is the chemistry between all the actresses.

The plus point of having seven main characters in a film is that whenever the pace slackens or you feel the plot is losing steam, there is someone to push it along. On the downside, some of these characters are bound to get sidelined as it happens in Hemant Dhome's long-drawn but fairly entertaining multi-starrer Jhimma.

On paper, the film has a simple story. Seven women from different walks of life, all strangers, meet on a trip, slowly make friends, and help one another overcome their fears and look at their problems from newer perspectives.

Generally, in films, the main character's arc begins in the first act, but when a movie has as many as seven main characters it is next to impossible to show everyone's character arc from the beginning.

The film's biggest strength is the chemistry among the actresses. Senior artistes like Nirmiti Sawant, who plays the wife of a politician, and Suhas Joshi make their presence felt. They are quite natural in both the emotional and funny scenes. Sonalee Kulkarni plays a newly engaged woman who is already fed up with her clingy fiance. Her character has a nice arc. Kshitee Jog is impressive as an inveterate worrier. In fact, all the actresses have done a good job. 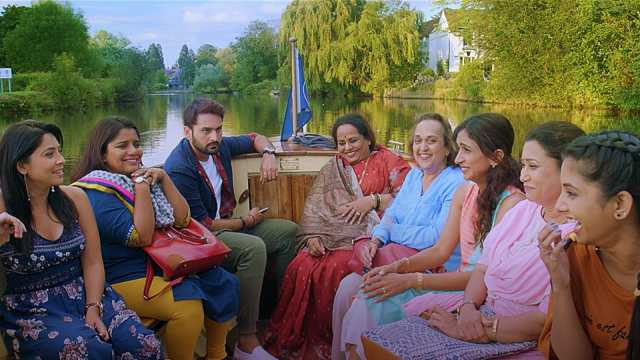 But you do wish some of the other characters, like their guide Kabir (Siddharth Chandekar), popped up more often. Chandekar does a good job of showing the helplessness and frustration of a man caught in the constant bickering of the women, but for the most part he is relegated to the background.

Yet, even at two hours ten minutes, the film feels too long and inconsistent. Some emotional scenes feel forced; some jokes don't land well. The reason for the emotional scenes not hitting hard lies in the underdeveloped characters, especially Sayali Sanjeev's 'modern girl' Krutika and Mrinmayee Godbole's Rama. Though you can't fault the performances of both, their characters add nothing to the plot nor do we learn anything about them. Every character is carrying some emotional baggage but for these two. Granted, not every character needs to be going through turmoil, but surely the writers could have given more depth to the characters? They are just there, that's it.

Another problem with the film that is a complete mood killer is the in-your-face product placements. The characters are even forced to talk about the benefits of the products, as if this were a television commercial.

The writers and the director have made a deliberate attempt to keep the tone light even when things get serious. When the jokes land, they are really funny. In that sense, Jhimma delivers. It's a decent family entertainer that keeps you engaged. But even as you are enjoying the individual jokes, you can't help but feel that the thing should have worked much better in its entirety.

While watching the film, I observed that more than 80% of the audience was female. Many came in groups of five and six. And most of the males in the audience were just there to accompany them. One such group of women sat right behind me. While some scenes, like the women secretly enjoying alcohol in their room and making silly jokes, made me chuckle, the group of middle-aged women behind me was in splits. As I was trying to make some mental notes at that moment, their laughter irritated me and I wondered what was so funny about a bunch of middle-aged women having a drink together.

Only after pondering over it on returning home did I realize that my lack of understanding perhaps stemmed from privilege. As an Indian male, I just didn't get it that simple things like having a drink together with friends or going for a night out, which we men consider pretty normal, are still a big privilege for most women. Probably that's why they were enjoying those scenes way more than I did.

Jhimma is the kind of film that women will enjoy a lot more, but that should not discourage men from giving it a try. Though it follows a lot of clichés, it's still worth a watch.