The filmmaker's insistence on addressing social ills in a light-hearted manner is the biggest drawback of the film.

Jayeshbhai Jordaar is a story of a man's struggle to keep his pregnant wife and unborn child safe from his misogynistic family and fellow villagers.

Jayeshbhai (Ranveer Singh) comes from the most influential family in his village in Gujarat. He has a nine-year-old girl Nisha (Jia Vaidya). The only reason she was allowed to exist is that it is prohibited for the villagers to kill their firstborn. The young man's father Ramlal Patel (Boman Irani) is the village headman and an unabashed male chauvinist. When a teenage girl complains about eve-teasing, instead of punishing the offenders, he bans women from using soaps to prevent men from getting enticed by their fragrance. Jayesh's mother Anuradha Patel (Ratna Pathak Shah) and Ramlal want a grandson who will carry forward the family's legacy.

Jayeshbhai, the complete antithesis of the men of his village, is a softy who abhors violence. While his father and neighbours display their manliness by hitting their wives, he dotes on his loving wife Mudra (Shalini Pandey). In this village, sex is used only as a means to an end — the production of heirs. Mudra, who is under pressure to deliver a boy child, was made to undergo six abortions after it was discovered that the foetuses were female. When it is learnt that another girl child is due, Jayeshbhai must find it in himself to turn into an action hero to save his family. There are also a bunch of Haryanvi wrestlers, led by the brawny Puneet Issar, who are regretful about having gotten rid of their girl children before they were born.

Writer-director Divyang Thakkar has come up with a film that wants to challenge regressive worldviews, but without compromising on the entertainment factor. From turning the lead man into the butt of jokes to taking a jibe at superstition, Thakkar tries to keep the audience entertained while delivering an important social message. But in making Jayeshbhai Jordaar a family entertainer, Thakkar has created an overly simplistic and predictable social drama that relies too much on the tried and tested formula.

Female foeticide is a serious issue and is no dearth of films, serials and documentaries on this subject. Also, most people have a basic idea about the topic. So everything hinges on the treatment and this is where the film falters.

The filmmaker uses outdated ideas to create humour, such as pursuers giving up the chase after a black cat crosses their path, a young nine-year-old behaving precociously, a victim of domestic abuse slapping her unconscious husband and Jayesh pretending to smack his wife — none of these scenes bring a smile on your face. If the film was released twenty years ago, this humour might have worked, but things have changed.

The filmmaker's insistence on addressing social ills in a light-hearted manner is the biggest drawback of the film as injecting humour in every scene only lessens the impact of emotional and serious moments. Another problematic aspect is the caricaturish nature of the male characters. The filmmaker tries to shift the blame for centuries of mistreatment and abuse of women on their lack of education and age-old traditions. As if one needs to have a degree to know that hitting women and controlling all aspects of their life is wrong.

The only issue that is explored in depth is the lack of marital intimacy in rural parts. Although the married couple has been living together for over a decade they never even shared a simple kiss. Thakur devotes a sufficient amount of time to this issue. But apart from this, the rest of the issues are handled in a haphazard manner. 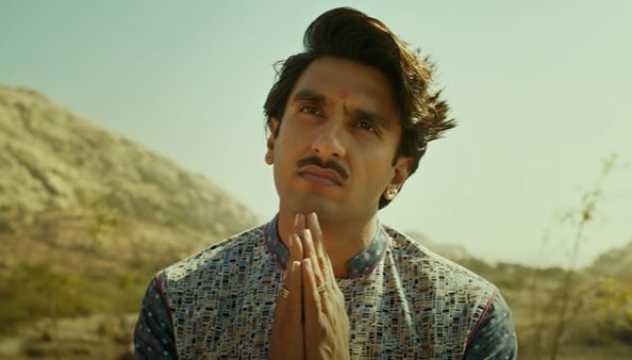 Another saving grace is the acting. Ranveer Singh is in top form. The actor gets into the skin of a soft-hearted and timid man with grace. He could have easily turned him into a caricature but thankfully that doesn't happen. Despite the script's many shortcomings, we never stop rooting for him and the credit should go to the actor. Pandey, who makes her Hindi debut in this film, does a fine job as a scared and obedient young woman.

But the biggest surprise of the film is the child artist Jia Vaidya. The young actress even overshadows Ranveer a couple of times with her sheer acting prowess. I'm really looking forward to seeing more of her. Irani is decent as the controlling and churlish patriarch. Despite the limiting nature of his character, he does a good job. Shah also provides adequate support. They had ample opportunities to add more depth to her character but she remains one dimensional for the most part.

Overall, Jayeshbhai Jordaar is a missed opportunity to make an entertaining but equally smart and quirky social comedy.

This clichéd and sometimes unintentionally funny film, which tackles the agrarian crisis, in...