Navjot Gulati's directorial debut has one-note characters, loud and crass comedy, and situations that are beyond the scope of rescue.

Templates are often the easiest way to make something look good, without putting too much of an effort. But one has to take some effort to pick the right template, and shape content accordingly. Navjot Gulati's Jai Mummy Di (2020) fails in this very task, by recreating some of the more mediocre tropes of 1980s Hindi cinema in an attempt to create something novel and different from the trend.

The story begins at a Delhi wedding, as loud and as obnoxiously opulent as it gets. From the first scene, we are introduced to the two warring matrons, Lalli (Supriya Pathak) and Pinky (Poonam Dhillon), who rule their families with an iron fist. Their hatred soon spreads over to the family, who enter into an all-out food fight at the venue. But there is always an end at sight.

That is with the new generation of Puneet (Sunny Singh) and Saanjh (Sonalli Seygall) who are madly in love with each other. The only trouble is that they are as scared of their mothers as the rest of the family. When Puneet hesitates, they decide to call it off. But just as their marriages are arranged to other people, they realise the 'true' nature of their love. Thus, a plan to subvert the mummy war is put into motion.

The film is bogged down by silliness and a campy humour that felt good in the 1980s, but rarely works these days. Take the opening 10 minutes of the film, which feature two major songs - one for the introduction, and the other for the romance between the leads. This is followed by another song in the next 10 minutes when the breakup happens, obviously.

The songs might even be subjective to taste, but the screenplay makes it difficult to put up a defense. Gulati focuses so much on the rivalry between the two women, without making us understand the reason for it. This has forced Supriya Pathak and Poonam Dhillon into one-note characters who never emerge from out of the stereotype of the loud, angry, but soft-hearted Delhi mothers. 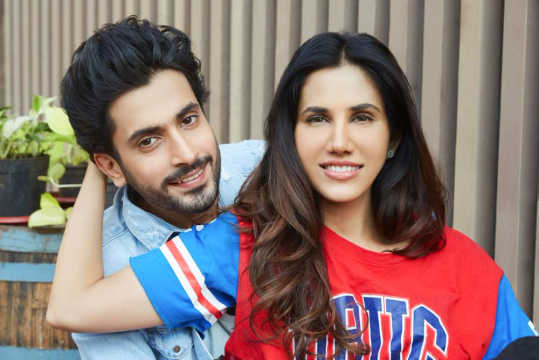 Then, there is the insipid, concussion-inducing romance between Sunny Singh and Sonalli Seygall's characters. While both look good on screen, the actions of their characters and the reason seem, to put it lightly, ridiculous. Despite the very picturesque way the two leads have been shot, their chemistry lacks any emotional undertone and simply falls flat.

The lack of any strong, wholesome characters around the leads makes it even more difficult for the screenplay to retain your interest. Veer Rajwant Singh, Danish Hussain and Rajendra Sethi are wasted in bit parts. Even the rare sighting of Alok Nath (still around) fails to generate some humour or spark.

Gulati's comedy has a lot of internal jokes about Delhi, characters from the region, and even their films. But he fails to transform them into a universal emotion. Some of the gags feel like the jokes you come up with a group of friends, who find them incredibly funny. But these do not always translate onto the big screen.

There are some funny moments in the film and they might have worked, if not for a convoluting plot. The screenplay also plods around with some needless diversions. The conclusion, when it arrives, feels too little and too late.

There is also the eventual reveal of the origin story that led to the rivalry, but it is simply too silly to generate any laughs.

Guns Of Banaras review: Masala film that's at least a decade out of date

Guns Of Banaras marks the comeback to Hindi cinema of Karann Nathh and Shilpa Shirodkar....

Gagan Puri's film has some laughs, but it is not a scintillating comedy powered by wit and It is...

Thappad review: An ode to the women all men need but don't deserve

Anubhav Sinha follows up his Article 15 (2019) with another nuanced yet direct slap on a patriarchal...