Illegal review: Raises the bar on courtroom dramas with a gripping story and performances

Directed by Sahir Raza, this web-series on Voot, is not just about lawyers and cases, but also the men and women donning the black robes.

Courtroom dramas in Hindi films have evolved in the last decade or so. This has been observed in films like No One Killed Jessica (2011), Jolly LLB (2013) and Section 375 (2019). The Marathi film Court (2015) presented an absolute raw picture of a lower court.

Now, we can add Sahir Raza’s Hindi web-series, Illegal to the list. But it would be wrong to categorize this as just another courtroom drama. Although the entire story revolves around a couple of court cases, a large part of the action takes place outside the court, and at times, in the lives of the characters.

Niharika Singh (Neha Sharma), a young, dynamic and idealistic lawyer has been nicknamed ‘mad lawyer’ by the media due to her heroics in court which fall flat. But despite that, the veteran lawyer Janardhan Jaitly, aka JJ (Piyush Mishra) hires her as he is impressed with her character and truthful nature. Hence, Niharika has to shift from Bangalore to Delhi. 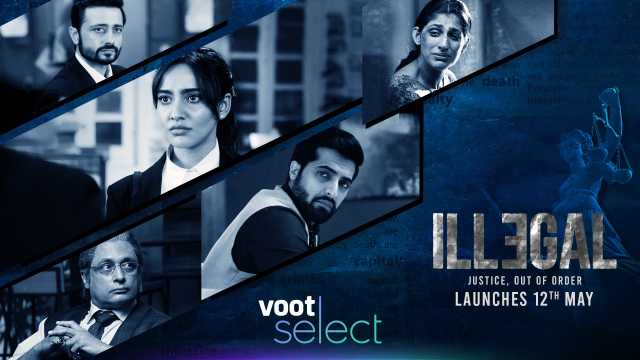 JJ runs one of the largest law agencies in India. He wants Nikarika to work on the case of Meher Salam (Kubbra Sait), who has been given a death sentence by various courts, while the President too has turned down her mercy petition. Niharika hops onto the assignment as she believes this is the right case to argue against capital punishment.

While she is busy on the case, a rich brat Neeraj (Ankit Gupta) gets accused of rape by a bartender Vartika (Aditi Tailang). Niharika is asked to work on this case too against her will. She is pitted against the ruthless but kind lawyer Puneet (Satyadeep Mishra) in this case.

This might appear as a story of a lawyer who has to fight two difficult cases simultaneously, but there is much more to it. It seems as if the universe has conspired to make Niharika face her past, which she thinks she has left far behind.

On her first day at work, she realizes that JJ is the father of Akshay (Akshay Oberoi), her ex-boyfriend, who will now be her colleague. He is married to Sue (Kriti Vij). The father (Deepak Tijori) of the rape-accused Neeraj has an unpleasant history with Niharika’s family.

Niharika isn’t the only one who is dealing with a complicated personal life. Every character has a personal track here. These personal journeys are not only interesting but they are also smartly woven into the main narrative of both the court cases. Illegal is an example of impressive, faced-paced writing with a good number of twists. Hence, the 10-part web-series seems to get over in a jiffy even for a slow watcher like me.

Despite being a thrilling drama, Illegal is also thought-provoking. Without saying much, it raises pertinent questions regarding the profession of lawyers and the helplessness of the criminal and legal system in India. For example, a rape accused pleads innocent by saying he doesn’t ‘need’ to rape anyone since he regularly gets partners to have sex. Nobody is completely white or black here. It’s all about which path a person follows during a crisis.

Along with the courts, the scenes at JJ’s office are also something you remember long after the series is over as it offers a glimpse into the working of a law firm. After a point of time, one can feel the palpable tension during almost every scene in the office where one person is confronted by another.

But all is not hunky-dory here. There are a few twists that appear questionable. But what irks you the most are two scenes where videos are recorded slyly. The second incident is more problematic since it brings about a huge change in the storyline.

Illegal is also a coming-of-age journey of the protagonist Niharika. The character gradually keeps evolving and maturing with every episode. Of course, Sharma’s performance plays a major part in it. This is the first time she is playing the central character and this might turn out to be her big ticket to fame.

Piyush Mishra’s act as JJ helps in keeping the mystery factor alive. There are times when you wonder whether he actually means what he is saying. He speaks a lot through just a glance on numerous occasions. Satyadeep Mishra is a winner all the way as he juggles between being a ruthless lawyer and a kind human being.

Sait wowed us by playing a difficult character with ease in Sacred Games. She had an even bigger challenge here which she passes with flying colours.

All in all, Illegal is a thrilling courtroom drama, which is unlike the usual entertaining films we have seen in this genre so far.

The web-series goes live on Voot Select from today.