Hum Do Hamare Do review: Kriti Sanon and Rajkummar Rao charm their way through this sweet but average family entertainer

The concept and performances in Abhishek Jain's family drama are more impressive than the treatment of key plot points in the film.

Director Abhishek Jain takes his time to build up to the key conflict in Hum Do Hamare Do. The slow pace with which the film ambles to its key characters and plot points is the only major disappointment in an otherwise sweet, entertaining family drama.

With enjoyable performances by Kriti Sanon, Rajkummar Rao, Manu Rishi Chadha, Ratna Pathak Shah and Paresh Rawal, the film has enough comedy and drama to keep you hooked, but the effect wears off just as quickly.

Dhruv Shikhar (Rajkummar Rao) dreams of having a family. Despite having built a tech start-up on his VR app, the one thing he cannot recreate virtually is a family. So when he falls for Anya (Sanon), another orphan raised by her uncle, the only hurdle in their relationship is her desire to marry someone with a family.

Dhruv does the obvious. He turns to his former employer, Dhamaal Premi/Purushottam Mishra (Rawal), to pretend to be his father. Mishra drags in his love interest, Dipti Kashyap (Pathak Shah), who still seems to be his eternal love. Cue drama, lies and mixed-up identities. 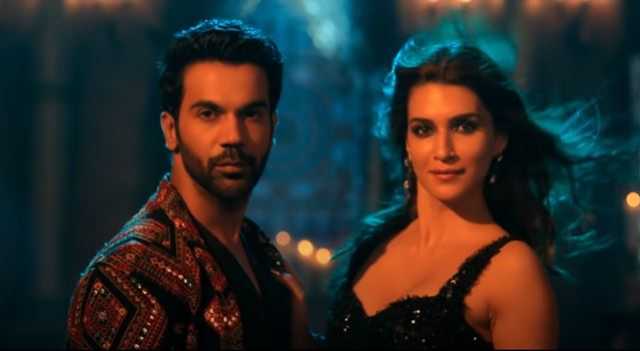 There is enough in the plot to create an entertaining comedy drama, which the film eventually does. It just takes its own time to set up the premise to land the punchlines. The first half moves ever so slowly, with conversations circumambulating, flashbacks thrown in and small conversations to add as fillers. Once this is wrapped up, the plot moves smoothly with the jokes coming thick and fast.

Love stories of middle-aged or old (depending on your perspective) couples are in vogue and the same premise forms the crux of this tale, too. If only it were treated better. There are plot holes that are left without exploration. There is a hint about Dipti Kashyap being distanced from her own son, which is also left unexplored. The reason for the couple's love story, mentioned in parts but never completely explained or brought to conclusion, feels a little odd. There needed to be a catharsis for that part.

The behaviour of Manu Rishi Chadha's character is explained through a short snippet in the second half, but the audience never learns why he changed, or if there was closure. Quite the opposite of Chekhov's gun, it is left hanging above the mantelpiece unexplained.

Then there are the dialogues which feel underdone. The conversations feel simple and dry. The gags work, but without the conversation to bolster them up, they feel like empty fillers.

These flaws are papered over by some effective performances. Kriti Sanon is growing more confident with every film and her range is starting to show. The actress looks seamless as the young, optimistic Anya dreaming of a future with a happy family and an adopted dog.

Rajkummar Rao balances it out as the introverted tech entrepreneur, stuttering and nervous as he fibs his way through arranging a marriage. While he is charming, the film does not demand as much of his abilities to be put on display.

Ratna Pathak Shah and Paresh Rawal feel like an odd couple and their chemistry takes time to click. The artistes do their best, but there is no easy flow in between. Besides, there are not enough scenes of them together for the audience to be invested in their relationship.

The scene stealer is Chadha, who delivers another smooth, effective performance as the cynical but lovable uncle. A word for Saanand Verma, who is quirky, unique and brings a different flavour to the story. Aparshakti Khurrana is effective, though he is getting stereotyped as the kind, helpful friend in one too many film.

The film is mildly entertaining and watchable. Jain's direction has the staple Maddock Films feel and delivers with enough gusto to keep you involved. The sparkling visuals, catchy music and some engaging performances make it worth the time spent.

Hum Do Hamare Do is available on Disney+ Hotstar.