Aparshakti Khurana plays an unlucky wedding performer who decides that a get-rich-quick plan is the answer to his troubles in this funny but mediocre comedy.

A feature comedy about population control, STDs and condoms, it’s a gold mine waiting to be uncovered. For the most part, Helmet (2021) delivers, until it remembers the social message part of its script and loses the plot.

Aparshakti Khurana is an orphan, a young man named Lucky who is anything but. He ekes out a living as a band member, a singer who performs at weddings. He is in love with Rupali (Pranutan Bahl) who works as a flower decorator for her uncle Guptaji (Shrikant Verma), who is Lucky’s employer. They want to get married but face opposition and derision from Rupali’s father Jogi (Ashish Vidyarthi).

Lucky aims to start his own wedding band but is blocked from getting a loan or a job by Jogi and Guptaji. With the prospect of an NRI (non-resident Indian) groom taking Rupali away looming, he decides on the perfect ploy to get money quickly. He, with assistance from his friends Minus (Ashish Verma) and Sultan (Abhishek Banerjee), will rob a truck full of electronic gadgets, making a tidy profit from the sales. 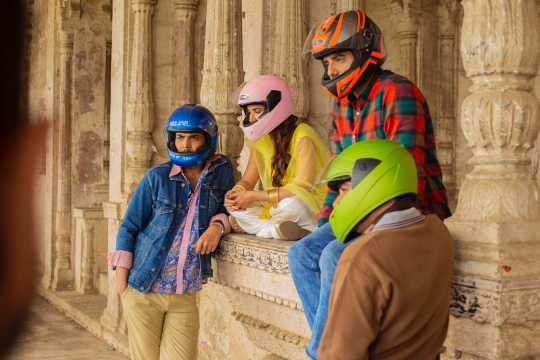 Unfortunately, their foolproof plan goes awry when their inept robbery doesn’t yield mobile phones, but boxes of condoms. The friends regroup somehow and come up with a clever way to hawk the goods, wearing a helmet to obscure their faces and finding a network of customers by research and development.

Helmet’s story by director Satramm Ramani, Gopal Mundane, Amit Tyagi and Ajay S takes on the taboo subject of contraception and brings it out in the open for our conservative Indian society. Rohan Shankar’s witty screenplay and dialogues turn the bumbling heroes into confident entrepreneurs, with mostly promising results.

When the friends are mid-heist, Lucky comments that the boxes are too light, while Minus guesses, "Mobile mein data nahin hoga na [Probably because the mobiles don’t have any data yet]!"

Lucky, Sultan and Minus are eventually joined by Rupali and a host of sellers who make the condoms the hottest selling item in the small town of Rajnagar. The trio of friends nails the comedy sequences. Khurana, in his first leading role, is both entertaining and earnest. Hopefully, this is the first of many such roles that tap into his potential. 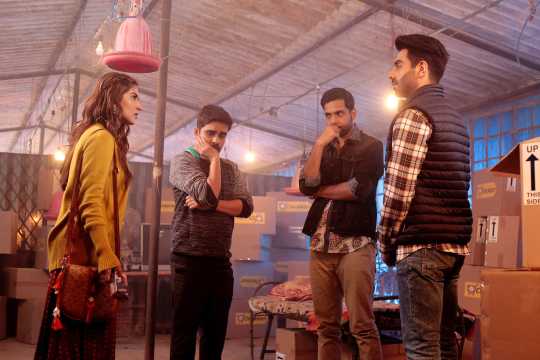 Banerjee and Verma are solid as Lucky’s friends who have no choice but to be roped into his get-rich-quick scheme. Bahl is also assured as Lucky’s smart and supportive girlfriend, though her character often lapses into the love-interest cliché.

Producer Dino Morea joins in for a cameo while Sharib Hashmi has a guest appearance as loan shark Bunty. But the actors can’t rise above the screenplay which suddenly realizes it has to address the social-message angle which was introduced in the opening.

With 15 minutes to go, the feature circles back to the issue of how condoms can prevent sexually transmitted diseases and AIDS and also help curb population growth, complete with an address by the prime minister and several articles from the media. Making a case study of an accidental robbery of condoms, Helmet turns Lucky, Sultan and Minus into role models.

The intention is right, but the execution by Ramani and Shankar in the final act is clumsy. The satirical comedy highlights the shame and hypocrisy we associate with topics of sex education and contraception, but as previous social-message films that revolved around a single subject have proved, nothing is solved with just one film. This is a continuing issue that requires much attention. Yet we should be happy that we are at least talking about it.

Helmet is now available on Zee5.

Writer-director Sandeep Mohan yet again brings us an interesting tale about ordinary city-dwellers....