Hellaro review: Garba becomes a mode of reclaiming their identity for a group of village women

The National award-winning period film highlights ingrained patriarchy and casteism in a Kutch village for an assured debut by Abhishek Shah.

When new bride Manjhri (Shraddha Dangar) arrives in Samarpur, Kutch, from the city, she has no idea of the suffocation that awaits her as the wife of gruff border soldier Arjan (Arjav Trivedi). The drought-ridden village is a world unto itself controlled by men. The women are suppressed at home, with only the daily walk to the lake to fetch water that sustains them.

It is there that one day they find a semi-conscious man Mulji (Jayesh More) lying on the desert floor, delirious and thirsty. There is debate amongst the women but finally Manjhri steps up to offer the desperate man some water. Mulji is a lower-caste dhol player, who has a tragic backstory of his own, and when she asks him for a tune, he is startled out of his stupor.

The women, again beginning with Manjhri, tentatively begin to dance the garba to the dhol’s beats. At first, they are guilt-ridden and consumed with thoughts of sin, but slowly, with the freedom and joy the dance brings, it begins to change them. 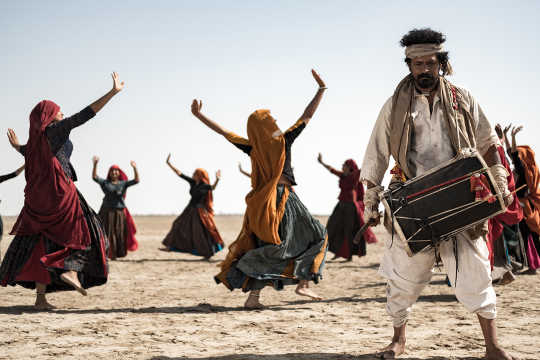 Set in 1975, during the Emergency, the period film demonstrates how these brave but vulnerable women decide to reclaim their lives and identities from the men dominating their lives. The women of the village have long been shown their place, on a back seat to the men. Barred from socializing or cultivating any personal hobby, the women live in servitude of their family members, from their husbands to their in-laws and children.

Since the past three years, the men have been continuously praying to the goddess Amba for rain. They have been disappointed thus far and begin to believe that any misdeed, especially by the women, can cause them bad luck. During the festive periods, it is the men who offer the prayers and dance for rains. The women have to fast.

After meeting Mulji, they enjoy precious bits of freedom as they go to fetch water and forget their worries in garba. Once again it is Manjhri who first leads the way and, slowly but surely, one by one, the women blossom as the dance frees them.

Inspired by folklore, Hellaro highlights how the patriarchy and casteism of that era dominated life. Sadly, many large sections of India still fight those dual evils today. Casting director-turned-filmmaker Abhishek Shah sets the mood commendably in his first film. 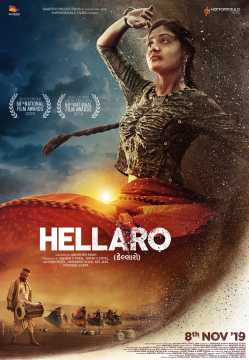 Indeed, the actresses are impressive and endearing as they each come into their own. More as the doomed dhol player and Bhaglo (Maulik Nayak) as the village head's son and film buff are also standouts as the only men who see the women as having any agency of their own.

The film displays authenticity in its rustic setting, aided by the arid, real locations in Kutch. Its bleakness seeps through on the big screen. The costumes by Niki Joshi gradually show how far the women have come, as their dull cholis (blouses) and ghagras (skirts) make way for vibrant reds before they are eventually discovered by the men.

Mehul Surti’s music, combined with Saumya Joshi’s lyrics, adds to the eventual awakening of the characters through the garba songs. The song 'Asvaar' ably demonstrates that as the women dance to the choreography of Samir Tanna and Arsh Tanna without restriction or censure in the desert.

The dialogues by Shah and co-writer Prateek Gupta add poignancy and a sobering reality to what the women of that time must have faced. The sight of Manjhri and the other women, dancing while battered and bruised, remains ingrained as you leave the theatre.

Hellaro has brought Gujarati cinema on the national stage with a story that is both affecting and memorable. Do watch it if you can.

The Gujarati-language short by Nemil Shah is a touching story about gender identity....

Cutting (Season 2) review: Reverses the charm and setting of the first season

The hairstylist siblings Sunny and Bobby get an unwelcome upgrade that makes us yearn for the of the...

The veteran actor essays a wronged father and a police officer investigating a suspicious family in...