Half Widow review: Hopeful end to grim tale of a missing husband

Directed by Danish Renzu, Half Widow is an intimate account of a woman in Kashmir whose husband goes missing after being taken in for 'interrogation'.

Vishal Bhardwaj’s Haider (2014) had mentioned about the concept of 'half widow' or aadhi bewa (in Hindi) prevalent in Jammu & Kashmir. The term is used for women whose husbands go missing after being taken in for 'interrogation' by the security forces, never to return. With nothing known of whether the men are alive or dead, their wives are condemned to be known as half widows.

While Haider makes a passing reference to the term, director Danish Renzu’s Half Widow shows a thorough picture of the life and struggle of a woman who doesn’t know if her husband is still alive.

Half Widow starts off in 1999. Like any traditional Indian woman, Neela (Neelofar Hamid), who hails from Srinagar, is excited about her wedding. Khalid (Mir Sarwar), her husband-to-be, is a kind and big-hearted man. Hence, he happily allows Neela’s brother Zakir (Shahnawaz Bhat) to stay with them as he is too attached to his sister.

Theirs is a small and happy family until one day some security force personnel land up at their home and take Khalid into custody for no apparent reason. This starts Neela and Zakir’s painful and taxing journey of running from pillar to post to find Khalid.

Aijaz Khan’s Hamid (2019), Ashvin Kumar’s No Fathers In Kashmir (2019) and Pravin Morchhale’s unreleased Widow Of Silence also deal with the theme of missing men in Kashmir. But it is interesting how each of these films, including Half Widow, has a different storyline and narrative technique. 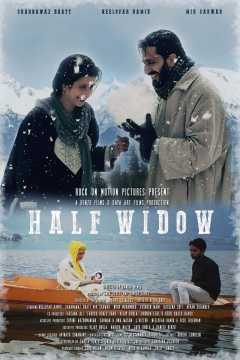 A few major points set Half Widow apart from the other films mentioned above. It is a more intimate portrayal and captures the lives of ordinary Kashmiris. The simple and realistic dialogues are an example. The use of the local language in a number of places adds to the realism.

Apart from being the story of a woman whose husband goes missing, Half Widow is also about the complex relationship between the sister-brother duo of Neela and Zakir. The situation brings about a conflict but their bond remains intact. As a viewer, you are taken aback when, during one situation, Neela sharply tells Zakir, “I am not your wife!”

Shahnawaz Bhat has to play a character that is innocent and, in many places, emotionally vulnerable. However, he also has to portray toughness at times. The actor manages such a difficult task with relative ease.

Mostly a film with such a storyline ends with either the person returning alive, dying or continuing to be missing. Half Widow takes you by surprise and goes on another plane altogether.

Besides being a film on the sorry tale of Neela, it seeks to go into healing mode by advocating hope and positivity while living in a war zone. And the film achieves this in a subtle way. As in, you can’t pinpoint one moment when the journey of Neela changes.

Neelofar Hamid transforms herself into just another grieving Kashmiri woman, but that’s not all. She also manages the turnaround of her character in a smooth manner. As Mir Sarwar’s character disappears quite soon, he, naturally, doesn’t have much screen time. But his performance ensures that you remember him well after the film ends.

There is just one point that is difficult to accept: the return of one supporting character after being taken away by the security forces.

All in all, Half Widow is yet another film that brings alive the ugly reality of the valley that is in stark contrast with its beauty. It is encouraging to see the real stories of Kashmir coming out so regularly these days in Hindi cinema.

Half Widow is now being streamed on the digital platform Amazon Prime Video.

No Fathers In Kashmir review: Stark reality of the valley through the eyes of two teenagers

The film, directed by Ashvin Kumar, revolves around the issue of missing husbands in the valley....

Widow Of Silence review: Riveting exploration of ruined lives in a mesmerizing landscape

Filmmaker Praveen Morchhale's fascinating film takes a searing look at the lives of the in and a...

Hamid review: Crisis of Kashmir is explored realistically through a child's eyes

Aijaz Khan's Hamid explores the situation in Kashmir through the story of a Kashmiri boy....