Gullak Season 2 review: The Mishras continue to entertain us with their interminable bickering

Amid all the dark and gritty web-series that are dominating the OTT space right now, the show is a much-needed breath of fresh air.

The second season of TVF and SonyLiv's heartwarming family drama Gullak puts the spotlight back on the Mishra family and its interminable bickering. Although some time has passed, not much has changed in the show's universe. The patriarch Santosh (Jameel Khan), who works in the electricity department, is still riding around on his old scooter while his younger son Aman (Harsh Mayar), who is preparing for his board exams is still struggling with his studies. The older son Annu (Vaibhav Raj Gupta) is still unemployed and his mother (Geetanjali Kulkarni), the glue of the nuclear family, still spends most of her time in the kitchen.

But as the show's narrator Gullak (Shivankit Singh Parihar) says, this show is not about "kahaniya [stories] but kisse [incidents]". We sure get to see many such kisse in this season. The Mishra family reside in a small North Indian town but the show, which depicts the trappings of a typical Indian family, could be set any town in the country.

From over-enthusiastic discussions about house renovation and heated debates over which two-wheeler to buy to the mother's constant sarcastic jibes at her unemployed son to the men taking over the kitchen once in a while only to realize how over-dependent they are on the woman of the house, writer Durgesh Singh and director Palash Vaswani have beautifully captured the very essence of a typical Indian middle-class household. 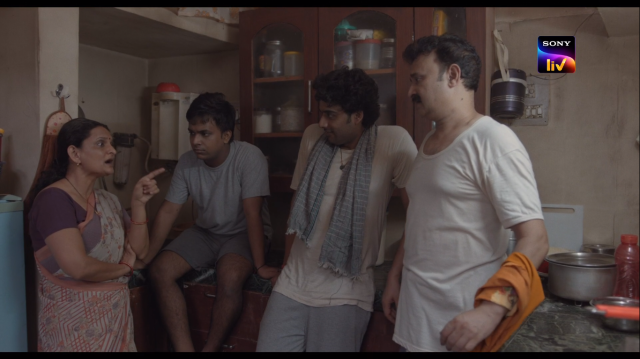 Sometimes relatable shows like these run the risk of getting over-ambitious after the success of their first season, ruining the sanctity of the simple narrative but thankfully the second season of Gullak stays true to itself, building on its predecessor and adding more layers to these four characters. All the actors have delivered powerhouse performances, especially Kulkarni and Khan whose characters constantly engage quibble over trivial issues.

Gupta as Annu has got a proper character arc this time and the actor has grabbed the opportunity with both hands by delivering a nuanced performance. Anurag Saikia's pleasing soundtrack and background music deserve a special mention.

Along with the positives, the second season has also carry forwarded the negatives of its predecessor, the most prominent being the predictable writing. Although the show isn't boring, you can't help notice it doesn't offer much in terms of character development except for Annu. Also, the format of one conflict per episode is good for mini-series, but if the makers are planning to make more seasons, it would be better if they start exploring overarching narratives.

Amid all the dark and gritty web-series that are dominating the OTT space right now, Gullak is a much-needed breath of fresh air. The simple, endearing family drama not only makes you smile but also has emotional depth and leaves you moist-eyed at the end.

Gullak Season 2 will be streamed on SonyLiv from 15 January 2021.

about 1 hour ago — Shriram Iyengar