The film offers a convincing cinematic recreation of the historic football match that brought an Indian team its first victory against the British.

Dhrubo Banerjee’s Golondaaj (2021) meets the expectation of a grand period sports drama as it offers a stunning recreation of late 19th century colonial Bengal and a meticulously shot and well-played football game, the first victory of an Indian side against the British rulers.

But when it comes to delineating the story of Nagendra Prasad Sarbadhikari, the father of Indian football, the film tries too hard to please fans of Dev Adhikari, who portrays the pioneering footballer, by devoting almost every frame to the star's heroic image instead of focusing on how the intrigue and enthusiasm of the young Nagendra eventually transformed the history of football in Bengal.

Hailing from an illustrious family, with his forefathers known for standing up to the British and valuing the importance of resistance, Nagendra chances upon the game of football at an early age and is fascinated. He is also intrigued by the use of physical strength in wrestling. Of a determined nature since childhood, Nagendra quickly turns into a leader and forms the Friends, Boys and Presidency Football Club and irks the British players, especially Major Frederick Jackson [Alexx O’Nell], an arrogant soldier of the East Surrey Regiment, who is also the finest player on their team. 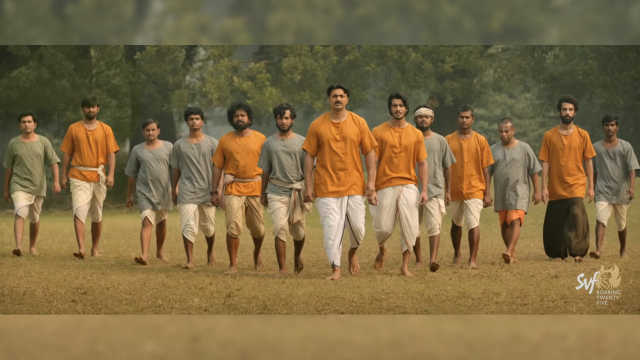 Nagendra’s elders, patrons and his revolutionary friend Brahma Bhargav (Anirban Bhattacharya), who always moves around in disguise, push him to challenge the colonial power with a football match in the upcoming Trades Cup. The story then narrates Nagendra’s journey of choosing the finest players to form first the Wellington Club and then the Shobhabazar Football Club that not only challenged caste and religious hegemony and brought a spirit of unity amongst the diverse Indian population against the powerful rulers, but also defeated the East Surrey Regiment in the tournament.

The film's plot progression is not linear. The director has collected the available research material on the historical figure and woven it with the objective of allowing Adhikari to raise the melodramatic sentiments of the storyline wherever the opportunity presents itself. A few sequences are composed in the manner of a stage production where the characters appear in the frame and simply deliver their dialogues. However, in the end, the football match truly gives an adrenaline rush and makes the film thoroughly enjoyable.

The film has lavish production values which transport the viewer to 19th century Bengal, and the recreation of the football match is also convincing. While the momentum of the screenplay is inconsistent at times, the visuals keep the mind engaged.

The parallel narrative of the revolutionary Brahma Bhargav reaches its perfect climax at the end, adding to the historical significance of the narrative of an emerging nationalistic conscience.

Adhikari has undoubtedly undergone a superb bodily transformation to bring alive the physical attributes of a football player who was also a wrestler. He appears a pro in the wrestling arena as well as on the football field. Unfortunately, his expressions and dialogue delivery do not match up. He is stiff and at times you feel that if only someone else had played the character the director might have refrained from lavishing too much attention to elevating his ‘star’ image and focused instead on making the biopic a success in all aspects.

Almost all the supporting artistes, including Anirban, who shines in different disguised dramatic avatars, John Bhattacharya, Indrasish Roy and Ujan Chatterjee as players on Sarbadhikari's team, Indrajit Mazumdar as one of the team's major patrons and Padmanabha Dasgupta as Raja Anandakrishna Dev of Shobhabazar rajbari (royal house) have done justice to their characters.

Alexx O’Nell magnifies all the vices characteristic of a typically insensitive and audacious colonial ruler. His expressions are definite and his screen presence matches Adhikari's. 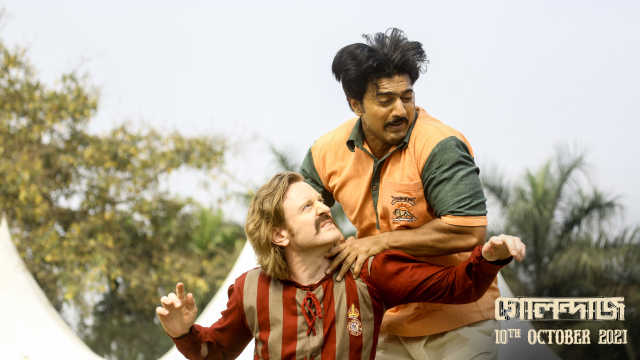 Cinematographer Soumik Haldar deserves accolades for the lavish mounting of the interiors of the aristocratic mansions, bringing alive the essence of the Calcutta Maidan as it used to be, and shooting the historic game skilfully at a gripping pace.

Bickram Ghosh has almost turned the grand production into a musical with his thorough background score, which sometimes feels too heavy for certain sequences as silence is often important for the emotional impact to sink in.

Golondaaj will be thoroughly enjoyed by ardent Dev Adhikari fans; for others the biopic will deliver a heightened emotional cinematic experience with some stunning visuals. The film was released in theatres across West Bengal yesterday.