The 20-minute film successfully highlights the salience of the Kummatty (1979) director's style of filmmaking.

Shaji N Karun’s documentary G Aravindan highlights the defining traits that set the titular filmmaker apart from his contemporaries. The documentary begins with a female narrator explaining how Aravindan poetically made nature an integral part of his films. Then, a voice-over states in the first person that the auteur always opted for subtlety over gimmicks and felt that it was important to stay grounded in social values while telling stories.

The documentary also features perspectives by the Padma Shri awardee's contemporaries, which help viewers understand the arc of his career. While depicting Aravindan's journey from being a cartoonist to a pioneering figure in Malayalam cinema, the director includes the views of filmmaker Bharathan, painter and critic MV Devan, filmmaker Shyam Benegal, journalist and film director Khalid Mohamed and playwright and actor Girish Karnad, who shed light on the persona of the auteur.

Aravindan’s early simple line drawings of characters in their socio-cultural context suggested the emergence of an artist with a flair for a kind of storytelling that was not in vogue at the time. The artist's uncompromising voice found its way into cinema when he directed his first film Uttarayanam (1974).

Conscious of the fact that sticking to one style of storytelling makes an artform stagnant, Aravindan refused to revisit the modes of filmmaking that he had adopted. Perhaps, the limited number of films he made afforded him that freedom. At the same time, the inputs of his contemporaries, who closely studied his films, make it clear that no matter how different each approach of Aravindan was, the underlying sense of wonderment in his works, the ability to speak volumes with a minimalistic approach and the urge to stay true to his own vision, always made it easy to pick out an Aravindan film from the rest. 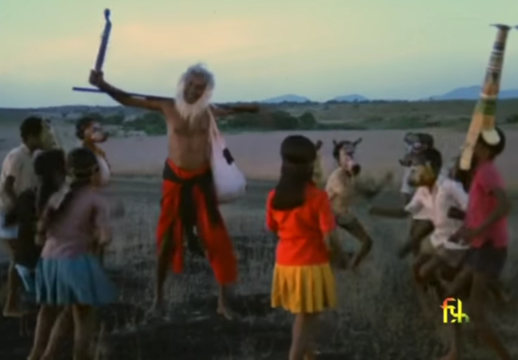 Shaji illustrates the main themes using visuals from Aravindan's films Uttarayanam, Kanchana Sita (1972), Thampu (1978), Kummatty (1979), Esthappan (1979), Pokkuveyil (1981), Chidambaram (1985) and Vasthuhara (1991). Also, via the first-person voice, some of the auteur’s own thoughts are interspersed, reflecting his sensitivity and self-reflexivity, especially when he speaks of avoiding the use of symbols, working without a proper script and featuring popular artistes such as Smita Patil, Bharath Gopi and Sreenivasan, who worked for free.

The choice of visuals and photographs and the North Indian classical music-based background score imbues the documentary with the subject's personality. Karun’s film successfully piques one’s interest. The decision to have multiple narrations sometimes confuses viewers, causing them to find out about the different facets of Aravindan’s works on their own. However, though the composition of the documentary sometimes falls short in terms of seamlessness, Shaji, in a relatively short span, successfully highlights the vital elements of Aravindan’s craft.

G Aravindan was part of an online festival created by the Films Division, titled Masters’ Constellation, and held from 9–11 July 2021.

Sandip Roy’s documentary doesn’t go too deeply into Sinha's career, but it does upon...