Four More Shots Please! review: The sisterhood returns for another round

The second season of the Amazon Prime series, directed by Nupur Asthana, brings back the four fast friends for more heartbreak, shots, and a lot more drama.

The four best friends, Damini (Sayani Gupta), Anjana (Kirti Kulhari), Umang (Bani J) and Siddhi (Maanvi Gagroo), and their favourite bar are back for a second season with Amazon Prime’s Four More Shots Please!. When last we left them at the end of the first season, the lovely ladies had had a spectacular fight and gone their separate ways.

In the first episode, they reunite in Istanbul, Turkey, as they go to ‘rescue’ Siddhi. All former disagreements and misunderstandings are put behind them as they bond over the scenic international locales. When they land back in Mumbai, it’s back to their former problems.

Damini has been ousted from the website she founded and is now writing a controversial book about the death of a judge that no one wants to publish. She also juggles the affections of two lovers, her gynaecologist Dr Warsi (Milind Soman) and Jeh (Prateik Babbar), the owner of Truck Bar, the girls’ usual hangout.

Meanwhile, Anjana tackles sexism and deals with the news of ex-husband Varun’s new wife and baby. She ill-advisedly gets involved with a married colleague, with disastrous results. Umang takes on the depression and mental health issues of her partner Samara Kapoor (Lisa Ray) with the couple going forward to take the next step: marriage. But will Umang be able to deal with Kapoor’s looming stardom in their relationship?

SoBo rich kid Siddhi, the youngest of the lot, comes into her own this season, finding an odd friendship with her previously controlling mother (Simone Singh) and goes on stage as a stand-up comic. However, her commitment issues are still prevalent as she wavers between new beau Amit (Prabal Punjabi) and old flame Mihir (Rajeev Shrivastava).

Created by Ishita Pritish Nandy, Four More Shots Please! hits its stride in the second half of the season. Over 10 episodes, the women navigate the twists and turns their lives take with jobs, relationships and friendship. But much like another bunch of four friends from another big city show, Sex And The City, this show grapples with issues both light and weighty.

Mumbai, especially its tourist-friendly southern section, has never looked so appealing. Or is it because we are all locked in? The show, shot by Neha Parti Matiyani and edited by Jabeen Merchant, focuses on artful interior decors and makes both Istanbul and Udaipur’s The Oberoi Udaivilas look incredibly inviting. Fashion director Aastha Sharma makes sure no outfit is repeated, and the dialogue by Ishita Moitra keeps the easy lingo between Hindi and English. 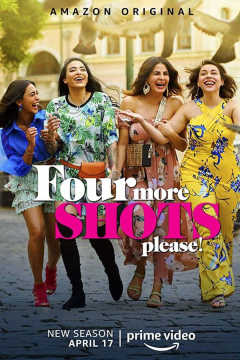 Four More Shots Please! gives its actresses, especially Gupta, Kulhari and Gagroo, more to do the second time around. Devika Bhagat has given new challenges to its leads, and while Bani J’s Umang has a lot on her plate this season, from coming out to her family to being an emotional support to Samara, sometimes the actress’s dialogue delivery sounds exactly the same. Ray and Prateik, too, suffer from the ailment at times.

The men, from Prateik to Soman, are mostly relegated to love-interest category, and hang around to support the women. However, despite the sincere intentions of director Nupur Asthana and the leads, some scenarios are just not believable.

Despite all their troubles, the women are able to bounce back too quickly from a job setback to a broken relationship. The relatability factor is late to kick in as their privileged lives stick out from all angles. However, from its wanderlust storylines to the strong bonds forged by the four friends, Four More Shots Please! is a welcome distraction from our own dour interiors.