Feluda review: Tribute from a collective consciousness of the iconic sleuth's admirers

Sagnik Chatterjee’s long docu feature Feluda: 50 Years Of Ray's Detective explores how the character has turned into one of the most popular Bengali icons.

Sagnik Chatterjee’s docu feature Feluda: 50 Years Of Ray's Detective might sound like a project that traces the journey of the popular Bengali sleuth since his creation by filmmaker, author and artiste Satyajit Ray; but it is more of a personal quest that explores the grounds that have turned Feluda into one of the most popular Bengali icons of all time.

The film is longer than a regular docu feature and requires a bit of patience when the narrative shifts from Satyajit Ray to his son Sandip’s episode of reviving Feluda films.

The docu feature attempts to cover a wide spectrum of aspects from Feluda's inception, recording the accounts of the artistes who made Feluda even more popular outside literature to the observations of ardent Feluda fans from different backgrounds and generations, within and outside Bengal.

The docu feature has a first-person narration by Mir Afsar Ali throughout. There is some interesting use of animation that pays tribute to Satyajit Ray’s magical illustrations. The animations often merge the texts with the cinematic adaptations and sometimes with the reality of contemporary times. These are the interesting elements that take the audience by surprise and also establish the relevance of Ray’s works.

The docu feature begins with the birth of Feluda in the magazine Sandesh in 1965. There are short audio clips of Ray to attest to the narratives that recreate the initial journey of Feluda’s popularity. Chatterjee brings forth the reasons that led Ray to create Feluda, to create a readership among teenagers in his attempt to revive the magazine. Thus, the director gradually records the journey of the cinematic adaptation of the character and its impact on the literature and readership itself.

While every year Feluda was being written for Sandesh or Desh magazine, alternatively, it was the cinematic adaptation of Sonar Kella (1974) and Joi Baba Felunath (1979) and the act of Soumitra Chatterjee as the modern yet quintessentially Bengali detective and Santosh Dutta’s rendition of Jatayu that took Feluda’s popularity to new heights.

Sagnik Chatterjee has composed this section with accounts from the veteran actor, insights from publishers of the stories, and accounts of contemporary authors like Smaranjit Chakraborty. While Soumitra’s narrative helps the audience delve into the process of creating a nationwide image of the detective, Chakraborty’s delineates the graph of its reception by fan followers.

Chatterjee has also incorporated the factors that led Ray to take inspiration from his films and make contributions to his writings. Santosh Dutta’s performance as Jatayu was one of the major influencing factors.

Chatterjee also goes into the making of the films in great detail. Though the details are not redundant, they are too much to grasp in a single experience. The process behind the making of Sonar Kella and Joi Baba Felunath contains some fascinating elements, for the world of Ray is always magical, but it becomes more testing when the narrative shifts to Sandip Ray’s films. 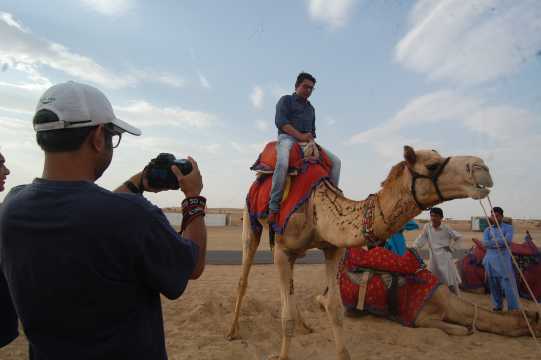 At the same time, the unit’s exploration in Benaras, where Joi Baba Felunath was shot, with Ramesh Sen, one of Ray's associates since his first venture, brings forth the madness that Feluda fans continue to carry among themselves till date. Sen’s search for Maganlal Meghraj’s house in Joi Baba Felunath is the kind of quest every Feluda fan wishes to embark upon and experience the magical world of Ray in the process.

Though it is widely known that it was the death of Santosh Dutta that stopped Ray from making further Feluda films, the account of the actors who later played Jatayu and often regretted taking up the role under Sandip Ray’s baton prove what a major artistic impact Dutta’s act had on the creator himself.

When Ramesh Sen’s quest takes a halt, there is an intermission in the film, from where the second chapter of Feluda’s journey under Sandip Ray’s supervision takes off.

The episode of Sabyasachi Chakraborty expressing his wish to play Feluda to Satyajit Ray is interesting, and so is Sandip’s journey of bringing Feluda from television back to the silver screen. However, again too much time is invested in presenting a detailed progression of that journey, including the various statements by Mohan Agashe and Saswata Chatterjee’s and Sabyasachi Chakraborty’s anecdotes of fellow artistes.

The episode of the making of Bombaiyer Bombete (2003) is quite confusing. Though the director primarily wanted to present the extension of the film and the story in Mumbai in the context of the Hindi film industry, the episode turns a bit abstract in terms of conceptualization.

At the same time, these episodes mark a significant departure from Satyajit Ray’s treatment of his creation in terms of infusing violence in his films. It shows how Sandip’s own interpretation and choice of stories eventually helped to continue the legacy rather than diminish it.

Then comes one of the more fascinating aspects of the documentary of Feluda’s appreciation by admirers from different language backgrounds, among whom translations of Feluda became widely available. While Bengali fans always carry Feluda books to the locations of the stories for the great pictorial descriptions provided by the author, fans of other languages get inspired to discover various locations in Bengal. Their attachment to the stories is proof of the reach of the creation and the author’s insights.

Chatterjee gradually takes Feluda outside the country to London and cleverly juxtaposes the narrative with Satyajit Ray’s earliest inspiration for Feluda, the Sherlock Holmes stories by Sir Arthur Conan Doyle. He also delves into a comparative study of the two great fictional detectives through observations made by intellectuals based in London and authors and journalists from Bengal, including Sanjeev Chattopadhyay, who happened to interview the master himself, and renowned journalist Boria Majumdar, according to whom Feluda incorporated the best of the traits of all the detectives that are primarily suitable for a teenage reader’s psychology.

There are also revelations of some little known facts, such as the creation of Dhakay Feluda, which was done by an ardent fan in Bangladesh but was not a great contribution to the legacy of Feluda.

To the reviewer, Chatterjee’s return to the Sonar Kella episode, again in great deal, after the episodes of Sandip Ray’s creations and Feluda’s significance outside Bengal and the country, is problematic. Why the director wanted to end the docu feature with Satyajit Ray’s period is unclear, because till then he had been taking the audience on a chronological journey.

The camerawork by Pinaki Sarkar and Subodh Karve reflects the intensive research work of Chatterjee and his emotional investment as a fan of Feluda. Editor Sujoy Dutta Roy has had a massive role to play in the entire composition as the docu feature weaves multiple time periods, merging the fiction with the reality, while making the journey entirely relatable to fans by contexualizing every account by the artistes, authors and fans appropriately.

Somnath Sudipto and Srimalya have mostly taken inspiration from Ray’s own musical compositions and background score for his Feluda films to render a wholesome experience. Anjan Dutt and Kabir Suman’s ode to Satyajit Ray through their songs also marks an important aspect of Feluda’s overwhelming popularity as a cultural icon rather than just a popular fictional detective.

Sagnik Chatterjee deserves credit for the enormous research he has conducted to complete the project. At the same time, it is fascinating how he managed to give importance to admirers of Feluda of different age, language and cultural groups and composed the entire cinematic experience from their perspectives.

However, the composition could have been more compact and the director could have saved some of his research material for more works on Feluda. Also, while encompassing the various elements, the director seems to have missed out on Parambrata Chatterjee’s modern adaptation of Feluda into a web-series. In one account, a London-based intellectual says Bengalis can never accept an interpretation of Feluda like Benedict Cumberbatch’s rendition of Holmes in the BBC series on the great detective. Perhaps the director, too, harboured this belief and so ignored the web-series?

Mukhosh review: Lacks the essential elements of a thriller

Filmmaker Atanu Ghosh’s sensitive writing shows that not all past relationships that end in to...