Digpal Lanjekar's film is well crafted and filled with very regional flavour that brings this episode from the Maratha king Shivaji's adventures to life.

India boasts of a long tradition of oral history, where episodes from the life of kings are celebrated through songs, dramas, and stories. Quite like King Arthur's legend in Britain, so are the stories of Shivaji, Rana Sanga, Prithviraj Chauhan in India.

Digpal Lanjekar's Fatteshikast (2019) travels down a similar style of history by recreating one of the epic battles that established Shivaji as 'the great'. The film is entertaining, colourful, and led by an ensemble cast that holds the story up with their performances. The action choreography and music (surprising and wonderful) are elements that add to the experience.

The story begins with a very Inglourious Basterds (2009) style interrogation by Namdar Khan (Sameer Dharmadhikari) interrogating villagers near Pune. This sets the backdrop of the entire film. Pune, under the rule of Shaista Khan (Anup Soni) is struggling. The Marathas are champing on the leash, but they cannot attack unless their king Shivaji (Chinmay Mandlekar) escapes from the siege of Panhala.

It is in this absence that the Lanjekar introduces us to the characters. From the master of disguises, Bahirji Naik (Harish Dudhade) to queen Jijabai (Mrinal Kulkarni), and the six-packed Yesaji Kank (Ankit Mohan) form the key players of the drama to unfold. With the return of the king to Rajgadh, the plan of Shaista Khan's defeat begins to form.

The strategist pulling the strings of it all is Bahirji Naik. With two informants, Kesar (Mrunmayee Deshpande) and Kisna (Nikhil Raut), inside Khan's camp, he finds a way to infiltrate Lal Mahal and launch a commando attack.

Lanjekar's film has a snarky style that borders on arrogance for the neutral viewer of history, but this is not history. It is a dramatised retelling of a story that has been retold hundreds of times. In that, Lanjekar manages to make it entertaining while keeping it real.

He does so by bringing in a plethora of characters that bring to life the intelligence and regional style of the Maratha empire. From the jungle loving Tanaji Malusare (Ajay Purkar) to the brilliant Kesar and Yesaji, the interaction of these characters brings to life the drama they are involved in.

The film also focuses not so much on the attack on Lal Mahal, but the planning of it. This involves recruiting commanders, gathering of information through Kesar and Kisna, the deceptive disguises of Bahirji Naik, and the intelligence of the king himself. In doing so, it manages to tap into the rarely explored facet of Mavla warfare - guerilla strategy. The battle, which arrives post all this elaborate planning, feels all the more effective due to this.

The film is led by an impressive cast. While Mrinal Kulkarni is regal as queen Jijabai, and Chinmay Mandlekar is effectively imposing as Shivaji, it is the ensemble that takes over. Ajay Purkar is quite good as Tanaji Malusare, the bear-like bearded commander who is as jovial as he is fierce. Ankit Mohan as Yesaji Kank plays the muscle of the team, quite literally, but feels like the weak link.

Mrunmayee Deshpande is simply brilliant as Kesar, the female who manages to strike a friendship with the Bahu Begum (Nakshatra Medhekar) as she gathers information about the castle. Her relationship with Bahu Begum, and the cat and mouse game with Namdar Khan makes for a very interesting watch.

But above it all is Harish Dudhade as Bahirji Naik, the dacoit-turned-spymaster with intelligence. With the multiple disguises and accents, Dudhade plays Naik with an irreverent sense of humour, and a smart presence. He holds the film together, and perhaps, Bahirji Naik might make the subject of an interesting biopic. 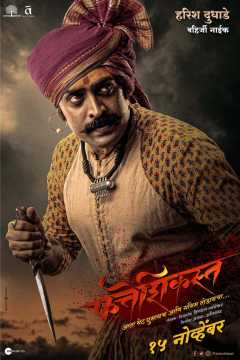 In addition to the dialogues coloured with enjoyable local flavour, the cinematography also explores the wide range of castles, while outlining the history of the Sahyadri range. It makes for an interesting observation to listen to the roles Lonavla, Panhala, Kalyan, played in the Maratha empire. The music is also a surprisingly impressive addition to this costume drama. It offers a necessary diversion and sets up the more emotional moments of the film.

Is the film biased towards the Marathas? Yes. In that, it is no different from Padmaavat (2017), Manikarnika: The Queen Of Jhansi (2019), or any World War II movie in Hollywood. The film also steps away from some key moments like Kalabat Khan's Konkan campaign, which was a turning point in the defeat of Shaista Khan. It is compressed into one single symbolic scrap, which reduces its impact. But it is a sign of the times we live in.

The trouble is that the bias affects the film's strength. Any great hero deserves a great villain. The portrayal of the Mughals as petulant and cruel, while popular, affects the drama in the film. In contrast, the only few deaths of Baji Prabhu Deshpande are shown as a spurring on of the Maratha movement. Each character, even the enemies, are given lines to praise the greatness of Shivaji throughout the film.

There are a few characters like Rayabaghan (Trupti Toradmal) and Namdar Khan (Sameer Dharmadhikari) who come close to becoming the menacing villain, but they are not allowed to grow. It is almost an injustice that the great Marathas have to fight these silly stooges. The greatness of Shivaji lies in the fact that he outwitted some really sharp commanders in the Mughal empire. To belittle the enemy and underestimate them was never his style.

Despite these flaws, Fatteshikast is an entertaining film that leads a growing interest among filmmakers in Maratha history. Coloured as it is, it is a costume drama worth watching for its craft, and its storytelling style.