The Netflix show, created by Rahul Nair, is a breezy but inconsequential look into the travails of a well-to-do 24-year-old who talks to himself via an old wizard.

Over the course of Rahul Nair’s Eternally Confused And Eager For Love (2022), lead character Ray (Vihaan Samat) manages to stand up a date, insult another, get fired for mistakenly trying to help a woman, and lose his only friend. It’s par for the course for a series that follows the misadventures of an introvert trying to step out in the dating world.

Ray, who has returned to India after studying in the US for four years, is riddled with anxiety in his life, especially when it comes to the opposite sex. His childhood friend Riya (Dalai) tries to ease his fears, his recently engaged co-worker Varun (Ankur Rathee) advises him to ask out any available female, but it’s Wiz (voice of Jim Sarbh) whom he turns to when the going gets bad.

The balding wizard superhero has been his crutch since he was a kid and it’s his inappropriate inner voice that pushes him on in life. The interactions and barbs between Ray and Wiz are the highlight of the series.

Ray confesses, “I just want someone to want me.” But the insecure young man acts more like a teenager than a man on the cusp of 25. And more often than not, he ends up sabotaging these opportunities because he overthinks it all. 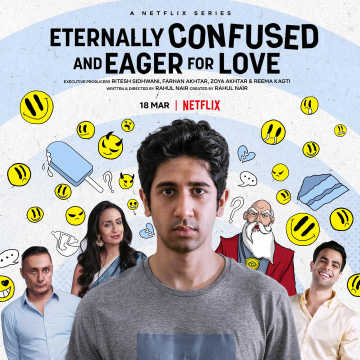 Written and directed by Nair, the short eight-episode series is a diverting yet inconsequential look into Ray’s privileged universe. Samat fits the bill as the clueless but well-meaning Ray who is trying to live up to expectations and just survive.

Towards the end, when Ray gets drunk and lands on the dance floor, he is delightful and a welcome change from his constant self-loathing. Samat channels Ray’s constant despair and understands where he is coming from.

Rahul Bose and Suchitra Pillai are superb as Ray’s imposing parents Gaurav and Meena, who are bewildered by his lack of ambition and goals in life. The rest of the young cast, from Rathee to Dalai to the young women who are potential romantic interests, are well chosen.

While Ray’s disasters in the world of dating are sometimes relatable, the world he inhabits is not. The entire set-up is upper-class Mumbai through posh cafes, clubs and homes, which are aptly detailed by the production team. The show is co-produced by Excel Media and Tiger Baby so it looks polished and perfect.

The show’s comments on modern relationships are witty, as are the unfiltered thoughts of Wiz, who often leads Ray to the side of devilry. It helps that the average length of the episodes is around 20 minutes, which makes watching the show a breeze.

But if you are looking for something meaningful in Ray’s quest to find love, you will have to keep looking. This eternally confused and dazed character has a lot of growing up to do.

Eternally Confused And Eager For Love is now available on Netflix.

Taangh review: Poignant homage to a father and the forgotten champions of India

Bani Singh’s moving documentary excavates a crucial moment in history while embarking on a to...

The documentary follows Srishti Bakshi who takes it upon herself to help educate, guide and support...