Directed by Mainak Bhaumik, the film boasts some good acting but is somewhat predictable.

Mainak Bhaumik’s recent film Ekannoborti, starring Alokananda Roy, Aparajita Adhya, Sauraseni Maitra, Ananya Sen and Kaushik Sen, is a tale of female solidarity set in a dysfunctional family. Though predictable and a bit dragged-out in the second half, the light-hearted and well-written film is packed with strong performances and heightened emotional moments.

Malini (Adhya) belongs to the Banerjee family, one of the great clans of Barasat that is on the verge of non-existence. In fact, their ancestral mansion is about to be sold off. Malini’s widowed mother, Mrs Banerjee (Roy), attends to the upkeep of the mansion herself and also takes all legal decisions as she knows she cannot expect much from her kin, who are only reminded of her and their home around Durga Puja.

Just before Malini sets out to visit her mother for the festival, she discovers that her husband (Sudip Mukherjee) has been cheating on her for the past five years. Shila (Maitra), her elder daughter is responsible and calmly deals with everything that comes her way. Pinky (Ananya), her sister, has several insecurities, regarding her physical appearance and creative abilities. Her depression causes her to lapse into self-destructive behaviours, but she is also known for her straightforward nature and no-nonsense attitude.

On Shila’s initiative, the daughters decide to be in their mother’s corner after learning of their father's infidelity, and they visit the Banerjee mansion together. After they reach Barasat, they discover that a director named Abhradeep Dutta (Kaushik) has been given the mansion on rent to shoot a web-series. Amid the festivities, the women gain a fresh perspective on life, men and their insecurities.

While the women learn to vanquish their inner demons and support one another in the backdrop of the celebration of feminine strength, Bhaumik also establishes a balance by introducing compassionate and understanding male characters to offset the misogyny of Malini’s husband and opportunistic tendencies of Shila’s fiancé. While the filmmaker Abhradeep Dutta and Shila’s self-made ex-boyfriend bring a gentler and brighter outlook on life, without judging them for being in a toxic relationship, Abhradeep’s assistant (Sawon Chakraborty) helps Pinky to come to terms with her vulnerabilities by accepting his own before her.

The relatable dialogue, which establishes the characters' battles, make the film worth the watch though the plot itself lacks surprising elements or moments of revelation. As the second half progresses, you already know how the characters are going to come out sorted by the end of the film and what their equations will be. The predictability of the plot makes the film a bit boring towards the end, but the scenes in which Malini, Shila and Pinky deal with their turmoil and also engage in intense emotional confrontations can be quite affecting. 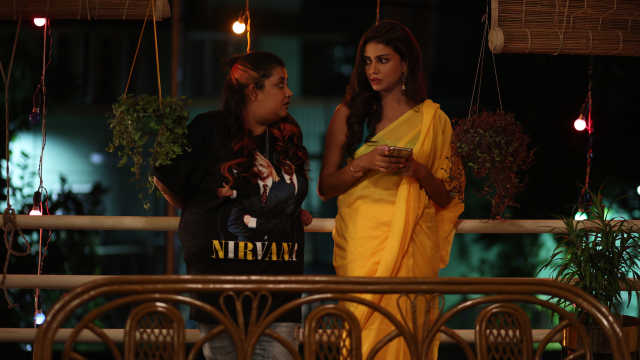 Ananya is a revelation as Pinky, who is always scared of turning into a victim of body shaming and cynical about all kinds of relationships due to her messed-up upbringing. From her awkward body language to her delivery of lines with full conviction, she has aced her character.

Maitra has delivered a restrained performance as Shila, who is compelled to put on a calm facade to hide her tumult.

Adhya is more convincing while delivering emotional outbursts than in the moments when she gets into the avatar of a submissive woman. She appears as if she is trying hard to look like an underconfident woman in these scenes.

Kaushik suits into the character of the charming director who has his own baggage and Roy is brilliant as the strong and dignified matriarch of the Banerjee family.

Savvy Gupta’s background score is quite soothing while Prosenjit Chowdhury’s camerawork cleverly juxtaposes the drama surrounding the Banerjee family and the festivities. Editor Sumit Chowdhury has made certain coincidences come across as organic in the journey of the characters.

With its share of entertaining moments, Ekannoborti is quite relatable. Bhaumik's attempt to hold a mirror to people with his characters and their crises is praiseworthy.