Though the younger audience might have difficulty identifying with the dated setting of the film, the ambiguity of the protagonist's journey will keep it engaged.

Saumen Sur’s Ei Ami Renu is an adaptation of Samaresh Majumdar’s eponymous novel which was immensely popular among collegians in the 1980s. Featuring Sohini Sarkar in the title role, the film narrates the story of a woman’s continuous chase for love in a patriarchal setting. While the younger audience might have difficulty identifying with the dated setting, the ambiguity of Renu's journey should keep it engaged.

Renu is aware of her hunger for romance from an early age, but societal perceptions compel her to identify it as the desire of a “bad woman”. When she falls in love with Sumit (Gaurav Chakrabarty) in college, she repeatedly warns him that she is not a "good girl". Sumit’s genuine passion and earnestness of emotions overwhelm her and sow a doubt in her at the same time. Infamous for her promiscuity, Renu wonders whether she deserves such devotion and genuine affection.

Her authoritarian parents and her doubts about her own emotions rob Renu of the courage to go against her family and marry Sumit. While she accepts her fate with an arranged marriage, she remains strongly aware of the independent nature of her heart. 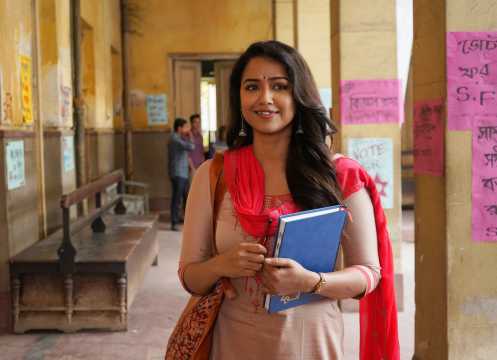 However, that doesn’t go well with her powerful government official husband Barun (Soham Chakraborty), who flies into a rage when Renu refuses to devote herself to him. As a man who believes he can bring everything under his control with his power and influence, Barun employs a man who loves to call himself BBC (Kaushik Ganguly) to dig up Renu’s past and bring the situation into his favour.

It is interesting how, in the process of digging up her past, BBC ends up getting to the depth of Renu’s emotions. While he remains an astute businessman, he doesn’t miss a chance to offer unsolicited philosophical insights into life.

Renu’s inability to rise above patriarchal constraints and the overall setting of the film could bore a section of the audience. But the film has an organic build-up that clearly conveys the contradictions in a patriarchal society. Hence, despite giving free reign to her emotions, Renu repeatedly surrenders to the powerful, as she is scared of facing her own vulnerabilities.

Sohini Sarkar beautifully brings alive the contradictions in Renu. In the first half, her playfulness dominates her appearance; in the second, her continuous struggle with self-doubt and her helplessness in rising above her situation drive the plot ahead.

Soham Chakraborty is perfect as the frustrated husband who eventually has to surrender his ego before love.

Though it is tiring to see Gaurav Chakrabarty always playing the good guy bereft of complexities, his natural performance is worthy of appreciation.

Kaushik Ganguly’s casting as a man who conceals his cunning and wisdom just for the sake of getting his job done smoothly is on point. 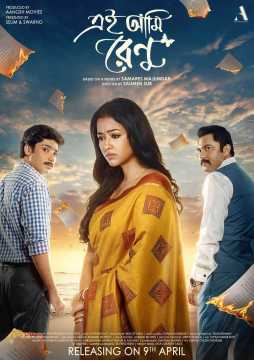 Rana Majumder has retained the flavour of the films of yore where heroines would be seen singing around trees with their saree gliding in the wind with the musical composition. The songs are melodious but the background score dominates the emotionally heightened moments.

Gopi Bhagat’s camerawork is smooth and thoughtful and captures all the characters' inner turmoil. Malay Laha has done a commendable job of maintaining the smooth pace of the film. However, the amateur chroma keying of some of the sequences ruins the experience.

Padmanabha Dasgupta deserves credit for a thoughtful and relatable script. Ei Ami Renu proves that films based on literature start with an advantage. Perhaps other directors will take note and explore the vast treasure that is Bengali literature.