The film is an entertainer with not a dull moment. Yet, it also provides a layered and moving depiction of how people from weaker sections become victims of circumstances.

Prateek Vats’s Eeb Allay Ooo! is a delightful film to watch because of the way it presents a narrative of marginalized people without making it tragic and yet providing critical insights.

Shot in the streets and slums of the national capital, the narrative provides a layered depiction of how people from the lower economic strata find themselves becoming victims of circumstances. It also criticizes the administration with the most bizarre yet subtle approach, leading the film towards an open ending.

The rawness of the setting, the brilliant performances by the artistes, and the glimpses of life and tradition on the streets of Delhi take the audience on an entertaining ride.

The film revolves around Anjani (Shardul Bhardwaj), who gets a contractual job as a monkey repeller. He learns the tricks of the trade from Mahinder (Mahinder Nath), who makes the sounds ‘eeb, allay, ooo!’ to shoo the monkeys away.

Anjani lives with his pregnant sister (Nutan Sinha) and her night watchman husband (Shashi Bhushan). No matter how hard he tries, Anjani is unable to use the sound with the same degree of success as Mahinder and so has to adopt other tricks to shoo the monkeys away.

Meanwhile, Anjani’s brother-in-law gets an increment. However, that comes with a condition: he is asked to keep a gun to scare offenders, with a warning not to pull the trigger. But Anjani’s didi (elder sister) considers keeping a gun at home inauspicious. 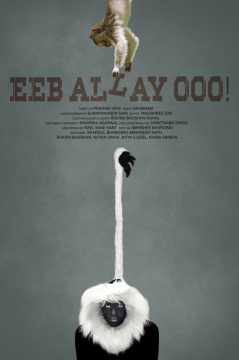 Anjani has hilarious encounters with the monkeys and continues to express his incompetence at his monkey-repelling job. His desperation coupled with the exploitation he faces for adopting his own methods of repelling the monkeys creates a tragic undertone under the apparently comical scenarios.

First of all, he is entrusted with one of the strangest occupations. Then the administration continues to threaten to fire him when he successfully manages to scare the monkeys away with his own ingenious ideas. The plot works as a beautiful allegory of the current political scenario, in which the system is always desperate to choke individual voices and keep the cycle of exploitation going.

The allegorical depiction becomes even more apparent when a fellow monkey repeller is killed for doing his job sincerely. His death begins to haunt Anjani, revealing the absurdity of the government job and the entire bureaucratic system that works only for privileged people.

The film depicts a beautiful and nuanced relationship between Anjani and his sister and between him and his brother-in-law. His equation with his girlfriend, too, exposes some traits in his character, including a trace of male chauvinism, when he is unable to admit his incompetence to her.

As his sister faces lack of proper care by her husband and often suffers from various kinds of deficiency, it shows how exploitation goes on effecting layers of society all the way to the bottom. Anjani's sister does not expect much from her husband; she knows he has a tough job with tough hours. But she is furious when he brings the gun home. A simple man who has never known violence, the husband doesn’t know what to do when he is entrusted with a gun. The consequences are depicted in the most poignant way.

Shardul Bhardwaj is brilliant in expressing and keeping his vulnerability real through his entire act. His character gets more real when he begins to take pride in his own intelligence and feigns as if he doesn’t care about authority.

However, every time he finds his own strength, he is slapped in the face by the system and shown his insignificant position. The final scene validates this idea of the director even more, when Anjani is lost in a parade of masked men.

The actor is subtle, natural and able to evoke empathy in the audience without overtly expressing his emotions on screen, even for a moment.

Nutan Sinha has a powerful screen presence. She beautifully builds up the compassionate, strict and innocent traits of her character with a nuanced performance.

Shashi Bhushan puts up a brief yet commanding performance that synchronizes well with the performances of the other two.

The background score of the film is gripping. Soumyananda Sahi’s camerawork serves the purpose of mirroring society in every moment. The raw footage sometimes blurs the line between a documentary and a feature film, but that’s the beauty of Eeb Allay Ooo!, edited by Tanushree Das, incorporating the reel and real to deliver such a smooth experience.

The mood of the film is almost like that of a person who has suffered a lot within or keeps doing so, but still laughs it off with all his or her might. On the outside, the film is thoroughly entertaining and never offers a single moment of boredom; at the same time, it moves you with its authentic depiction. There are a lot of elements in the film, yet Soumyananda Sahi doesn’t fail to pack the film with cinematic moments.