The actors fail to add any depth to their unidimensional characters.

A husband and wife move into a new house. As the couple get used to their home and new surrounding, the wife starts sensing an unknown presence. Naturally, the husband doesn't believe her and reassures her that it's just hallucinations, only to be proven wrong immediately. How many times have we seen this plot?

Writer-director Jay Krishnan's Dybbuk starring Emraan Hashmi and Nikita Dutta is another run-of-the-mill horror film that has all the cliches of the genre.

The pattern has already been set for these kinds of movies. Sam (Emraan Hashmi) and Maahi (Nikita Dutta) are married against her parent's wishes. She recently had a miscarriage. Sam, who works in a nuclear waste management company, has been offered a long-term project in Mauritius. Though Maahi is having second thoughts about moving to a completely new place, Sam convinces her. Things are finally looking good for the couple.

While setting up their house in Mauritius, Maahi buys an intricately designed box from an antique shop, and the trouble begins. From the atmospheric setting, a pregnant woman and all-knowing priest, the film is filled with all the tropes associated with the horror genre. 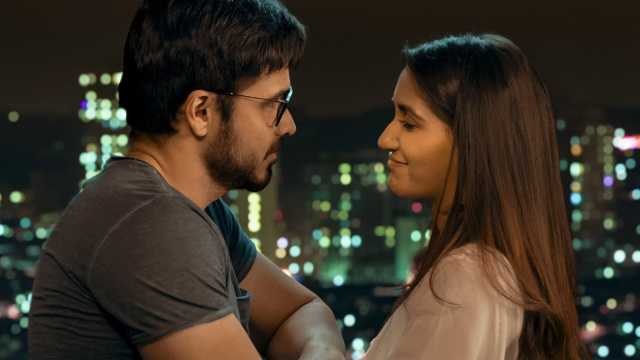 The film had an interesting element from Jewish folklore — the Dybbuk, the spirit of a dead person that attaches itself to a pious soul or to those whose body and soul are not aligned. But the bland storytelling and filmmaking completely ruin whatever little novelty this new element brings to the plot. There is another interesting thread, nuclear waste, which if used properly could have added thrills for some reason, except for a couple of brief mentions, we never hear of it again.

Jay K's screenplay, in fact, the whole film, seems to be on autopilot. The dialogue and unnecessary dramatic pauses make the scenes appear staged and forced. Everything seems familiar and you know what they are going to say next, how many seconds will their dramatic pause last to the twist in the climax.

The film is also a big letdown visually. Despite being shot on a picturesque island, there is hardly one scene that uses the setting to its advantage. It also doesn't help that actors have also not put any effort to at least add some depth to their unidimensional characters. Hashmi has been part of so many horror films in the past, that it feels like he is sleepwalking through Dybbuk. He has four or five expressions that he repeats throughout the film. Dutta, for the most period, just stares blankly either at Hashmi or the camera.

Manav Kaul, who had a resurgence of sorts in the last couple of years, is also disappointing in his role as the Jewish priest Markus.

Overall, Dybbuk is a big letdown in every department.

Dybbuk is available for streaming on Amazon Prime Video.