Subha Das Mollick's documentary is an informative, fascinating look at a part of Kolkata's past.

There are hidden histories in many cities, and Subha Das Mollick's Dwelling In Travelling takes us back in time to trace the origins of Kolkata's Jewish community, how it thrived and later dwindled so much that only 17 Jewish people remain in the city now.

The documentary serves both as a history lesson and as an account of an immigrant community that was welcomed and melded into the rest of the religions and cultures of India.

Dwelling In Travelling goes back all the way to 1798, when Shalom Cohen, a jeweller and trader, arrived in Kolkata after travelling to Surat and Punjab. He became the founder of Kolkata's Jewish community. Originally from Basrah in Iraq, the Baghdadi Jewish people travelled the sea routes from there to Shanghai in China and settled in port cities along the way. Kolkata (then Calcutta) was one such.

Cohen's family eventually came over and settled itself and so did others from different professions. The Ezra, Elias and Sassoon families also established themselves and succeeded in settling the community in the city. Two synagogues were built as were schools for the girls and boys of the community to learn more about their heritage and religion.

The Jewish influence can be seen in other aspects of the city, from the architecture to Nahoum's Confectionery that still makes the traditional pastries and delicacies that it did on its inception in 1902. While the Jewish residents of the city today number in low double digits, those descendants with ties to the cities and those who once used to reside here return to recount their memories of a time and place that doesn't exist any more.

Das Mollick features residents Flower Silliman and her daughter Jael as prominent keepers of this history, but also speaks to former residents and descandants who drop by occasionally to maintain their ties. One such former resident states that she sees the Calcutta that she once knew, not what it is now. Various historians and experts also offer a more detailed look at the lives of the community then.

The once-large community saw a massive exodus from the 1940s through the 1960s when Jews migrated all over the world, including to the US, Europe, and, of course, Israel in search of better opportunities and called the rest of their families over. Many of the Jewish women in Kolkata married American soldiers who were stationed in the city during World War II. 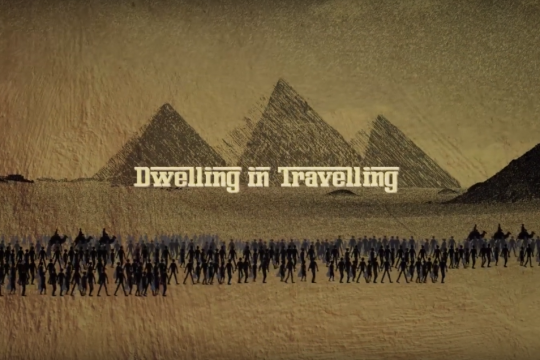 While looking at the past, the film also gives us a glimpse of the community's present. The girls' school, which once housed only Jewish girls, now has predominantly Muslim students. Many of the old bungalows and buildings have either been torn down or repurposed for something else.

But a special re-dedication ceremony for the restoration fof the Magen David synagogue in 2017 becomes a wonderful celebration of joy as diginitaries, former attendees, and many other special guests gather. The mood of Das Mollick's feature is both nostalgic and bittersweet, as it serves as a time capsule of the memories of the Jewish residents, past and present.

At the beginning of the screening, Das Mollick commented how making the film served as an eye-opener to her as well, as she herself was not aware of the city's diversity and history. One walks away with a similar feeling after this informative, well-researched film.

Dwelling In Travelling, which is playing in the National Competition section of the 16th Mumbai International Film Festival, was screened on 29 January 2020.

The National award-winning documentary, filmed over three years by brothers Vijay and Ajay Bedi, in...

Elephants Do Remember review: 93-year-old freedom fighter Rama Khandwala has lost none of her spark

The 38 minute documentary catalogues the now sedate life of Khandwala, among the last living members...

The short film has a bizarre and unexpected climax, which actually sends out a clear message that at...