The Hoichoi web-series explores how a wife's search for true love turns her into an investigator.

While it is refreshing to watch both artistes for a longer time in a different kind of production, writers Romit and Mitali Ojha and director Promita have made sure to incorporate certain flavours from the mass-entertainers that the audience normally associates the duo with.

Dujone begins with Amar Basu Thakur (Chakraborty), current owner of a jute factory, meeting with an accident. Fast forward two months later, and Amar’s strange behaviour begins to baffle his food-critic wife Ahana (Chatterjee). While the rest of Amar’s family seems to see no difference in him, Ahana grows restless when Amar forgets his birthday and even refuses to make love to her.

Initially, Ahana suspects Amar to be having an extra-marital affair; the private investigator she appoints to dig into Amar’s activities makes it apparent that Amar had been fooling around for years.

Certain dialogues in the first episode make the viewing experience a little trite. But from the next episode, as Ahana begins her quest to get to the truth of Amar’s behaviour, the series picks up pace.

The thriller narrative is not excitingly complex. The writers have only retained the suspense by concealing the truth of Amar’s baffling transformation by playing with a subplot involving intelligence agents trying to forestall an impending terrorist attack until the mystery is unravelled in the eighth episode. Meanwhile, Amar oscillating between his avatars of shrewd businessman and aloof husband and Ahana chasing the truth while being tracked at the same time keep the audience engaged. 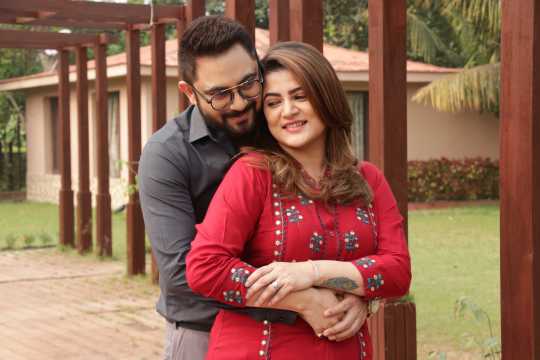 The web-series ends with the indication that the connection between Amar’s mysterious background and the intelligence agents trying to stop the terrorist attack will be explored further in the next season. It should also be interesting to see how the character of a food critic and loving wife becoming an amateur sleuth is developed in the upcoming season.

While neither artiste offers much change in style despite the change in medium and genre, Chatterjee’s performance stands out for making the range of emotions she goes through feel real on screen. She is evidently ruthless as a chaser of the truth, but at the same time she comes across as vulnerable and eager to experience the marital love she seems to have lost.

Debshankar Halder, as Amar’s father with a deceptive nature, puts up a convincing act. Indrajit Majumdar as an intelligence officer has done a decent job, too.

Both Souvik Basu’s cinematography and MD Piyasuddin’s editing lend a stylish yet realistic look to the thriller. Amit Ishan’s background score amplifies the suspense in each moment of Ahana’s adventure.

Dujone is not exceptional in terms of content. However, while Chatterjee, with her commanding screen presence, makes watching the series an engaging experience, the makers, too, deserve credit for not making the content too unrealistic even as they push Ahana to become an investigator in her quest to get her love back.

Dujone is now available on Hoichoi.

Tangra Blues review: More a tale of an ex-gangster's redemption than of budding slum musicians

The disjointed screenplay fails to bring out the unique character of the titular slum and highlight...

Sukumar Ray review: When Satyajit Ray made an engaging documentary with just photographs

The documentary shows how the legendary filmmaker's father Sukumar Ray, too, led a fascinating...