Filmmaker V Shantaram’s black-and-white musical on the brave doctor's life is an inspiring tale of valour and humanitarianism.

Dr Dwarkanath Kotnis. It is a name that sparks some recognition amongst Indians. He is a man remembered more by people of a certain generation. The doctor was one of five physicians sent by the Indian government to China for medical support during the second Sino-Japanese war in 1938.

The global novel coronavirus pandemic has once again highlighted the crucial role of doctors. The tireless heroes of the field of health care, along with nurses and support staff, are working in overwhelmed hospitals around the world while most of the population remains at home, in quarantine.

Their plight has been the focus of many news stories. Many medical professionals, lacking proper personal protective equipment (PPE), have contracted the COVID-19 infection themselves. Yet, many doctors, nurses, and health-care specialists from China to Cuba are volunteering their services to the worst-hit countries like Italy and the UK.

Dwarkanath Kotnis, too, heard the call in Mumbai (then Bombay) to volunteer after he got his medical degree. Dwarka, played by the formidable actor-filmmaker V Shantaram, returns to his hometown Solapur in Maharashtra to inform his family. According to the book V Shantaram: The Man Who Changed Indian Cinema, the filmmaker chose Kotnis's life as 'he wanted the film to send out a message of humanity that would elevate India's image internationally'.

Dwarka’s father's wish is that he set up his medical practice in his hometown, but he eventually gives in to his son’s volunteerism. Kotnis is one of five doctors chosen for the international mission as they set out for the Ya’an base in China. In real life, Kotnis and the other doctors first arrived in Hankou, since merged into the present-day mega city Wuhan, before moving to Ya’an. As we now know, the first reported case of the coronavirus pandemic emerged from Wuhan.

Shantaram plays Kotnis with his usual vigour and sincerity. Dwarka is shown as a principled young man willing to risk his life to be of aid to others. When he lands in China, he saves several children from a burning building. 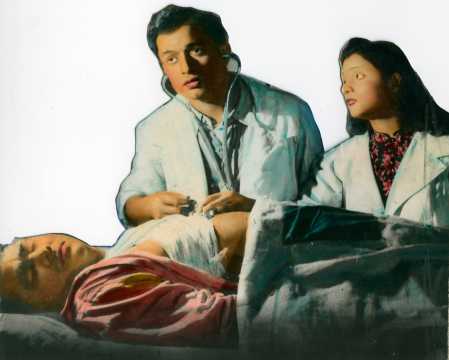 He stays in touch with his family, both sides writing long, newsy letters to each other. Kotnis treats his medical duty almost like a soldier, choosing to stay back and treat the wounded Chinese even after his father’s death in India.

The film shows the camaraderie between the Indian doctors as they are stationed at their posts. Later, the biopic moves on to a filmi introduction to the woman, Ching Lan/Quinlan, who would eventually become Dr Kotnis's wife. She initially disguises herself as a man, but later becomes the doctor’s second during his surgeries. They eventually fall in love after working together in close quarters.

Shantaram’s wife Jayshree plays the young Chinese woman, ably matching the actor-filmmaker in her scenes. She and the other artistes playing Chinese characters, like Baburao Pendharkar, have their facial characteristics altered to play the parts. Towards the end of the film, their daughter Rajshree, then a toddler, turns in an adorable appearance as Kotnis's son Yin Hua.

Kotnis and Ching Lan’s wedding is seen as a union of the two countries, but their happiness is short-lived as the base is bombed and the troops are forced to relocate on foot. This leads to an illness spreading out amongst the people, and the deaths start to pile up.

The selfless Dwarka injects the illness into himself to check for a treatment. He finds a treatment for the soldiers and is embraced as a son of the soil by the Chinese. For a serious subject, there are a few songs, but Vasant Desai manages to interject moments of happiness through them. 'Main Hoon Nanhi Nayee Dulhan', sung by Jayshree, is a catchy earworm that is easily hummable.

Dr Kotnis Ki Amar Kahani, though largely shot indoors in a studio, is engaging in its heartfelt portrayal of the noble doctor, thanks to the screenplay by Khwaja Ahmad Abbas. Shantaram's direction, too, is masterful, as he sticks to the facts and captures the poignant moments of the doctor’s life in China. Knowing his audience, he even adds a moment of levity here and there to lighten the mood. 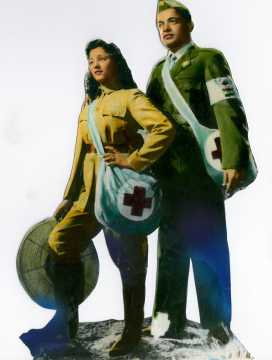 The film’s finale connects Kotnis’s return home in the beginning to Ching Lan visiting her in-laws in the end in a tragic but meaningful way. This timeless story is worth revisiting any day.

Sadly, Dr Kotnis is remembered more in China today for his selfless actions. He died of an illness, far away from his home, and the Chinese have dedicated a statue in his honour in Hubei province, of which Wuhan is the capital.

Starring Vidya Balan, the film premiered on YouTube as part of the We Are One: A Global Film...

Directed by Ritam Srivastav, the crime show is based in Uttar Pradesh's Purvanchal region in the...

Firsts review: Doesn't offer anything new apart from the concept

The mini-series of 24 episodes is about a couple who are trying virtual dating in the COVID lockdown...