Written and directed by Hrishikesh Gupte, the film reminds you of those hilarious television spoofs of yesteryear.

There was a time when MTV used to regularly produce spoofs on various Hindi films in its segment called Fully Faltoo. The impact of that show was such that people discuss it even today, more than a decade after it was last aired. There were a few other similar shows back in those days.

Writer-director Hrishikesh Gupte’s parody in Marathi titled Dil Dimag Aur Batti (2022) brings back memories of such spoofs that we witnessed on television in the years gone by. The film is a parody of the mainstream Hindi cinema of the 1970s and 1980s in terms of storylines, characters, execution and various tropes.

Tragedy strikes the family after Amitabh goes missing following an accident in which he gets hit on the head. He loses his memory and circumstances take him to Bihar where he gets a new name – Dharmendra aka Dharam. Meanwhile, Jaya’s three kids grow up and become struggling actors. They await that one break to make it big in the film world. 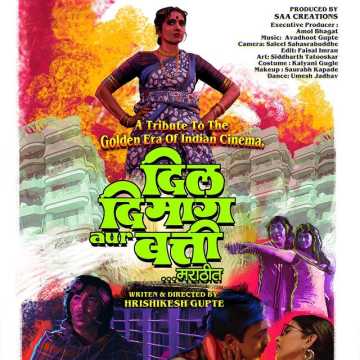 The family is also targeted by a dacoit Batti (Vandana Gupte) and a thug Godman (Kishore Kadam).

There are a couple of differences between the TV spoofs of old and Dil Dimag Aur Batti. The TV versions were just a few minutes long; Dil Dimag Aur Batti is a feature film that runs for more than two hours. The spoofs on the small screen starred the host and other struggling actors. But Gupte’s movie has some of the biggest names in Marathi cinema playing important roles. The film overcomes the challenges in terms of narrative and performances.

The basic premise itself is hilarious and its presentation will have you in splits as the story starts unfolding. A man named Amitabh married to Jaya and the latter’s sister Rekha is just one example of the hilarity.

The film has continuous doses of twists and turns; much more than what the synopsis given here may suggest. It doesn’t take much time before you are convinced about Gupte’s deep interest in and abiding knowledge of mainstream Hindi cinema of that era and its tropes. And if you are someone who shares the same interest, the film will definitely work for you.

The writing also needs to be lauded for keeping a grip on plenty of subplots and characters. Like the commercial capers of the 1970s and 1980s, Dil Batti Aur Dimag also keeps the viewer engrossed.

Having said that, at a couple of instances in the second half you are compelled to pause and go through the story and the characters in your mind again because of some complications in the narrative. The other issue is that Sonali Kulkarni’s character doesn’t seem to age even when the story takes a leap of 20 years. But you could put that down to 1970s cinema.

Dil Dimag Aur Batti is also very 1970-ish when it comes to performances, which is exactly what the plot needed. Sonali Kulkarni delivers a high-quality performance, excelling while playing three different characters. Dilip Prabhavalkar is superb as usual, playing more than one character with precision.

Pushkar Shrotri is funny, both as Amitabh and Dharmendra. Vandana Gupte, Pushkaraj Chirputkar and Kishore Kadam are appealing in the unusual roles of a dacoit, a Sardar and a babaji. Other supporting artistes like Vaibhav Mangle, Anand Ingle, Sagar Sant, Mayuresh Pem and Sanskruti Balgude keep up with the main cast.

Experiments like Dil Dimag Aur Batti are rare in India, especially in the feature film space. This one has certainly turned out well.

Dil Dimag Aur Batti is being released in cinemas across Maharashtra on 6 May.

While the film's melodramatic moments increase its length, they lack the depth that was to...