The two thematically different but linked narratives in the film fail to deliver the essence of the journey of the transformation of the central characters.

The trailer for Bratya Basu’s film Dictionary suggested a story in which the main characters go through a quest for the deeper meaning of relationships and of values. However, the two thematically different narratives in the film fail to deliver the essence of the journey of their transformation, leaving the director to somehow try and explain the significance of the title at the end.

It was apparent from the trailer that the two narratives revolve around the characters of desperate but pretentious businessman Mak Chatterjee (Mosharraf Karim) and Smita (Nusrat Jahan), homemaker wife of forest officer Ashoke Sanyal (Abir Chatterjee). The two narratives are connected through Suman (Arna Mukhopadhyay), who happens to be Smita’s love interest and Mak’s brother-in-law.

Mak is idealistic and his ideas about expanding his business are also mostly illusory. He is in continuous conflict with his son Rakesh, who is against putting up any kind of façade and is clear about his interests.

Mak begins to get disillusioned after Rakesh attempts to correct a bank professional when the latter confuses the meaning of ‘knave’ and refuses to admit his mistake. While Mak is initially disturbed by Rakesh’s honest display of courage, the journey of finding the true meaning of the word 'knave' makes him question his own intentions and goals.

But the screenplay treats Mak’s journey hastily, leaving it bereft of nuance. The director concentrates more on depicting his frustrated demeanour and his almost comical attitude. The attempt to validate certain specific thematic points instead of focusing on the journey robs Mak’s narrative of an organic flow as well.

Smita’s narrative is even more lacking in depth and complexity. The reason she is looking for happiness outside marriage is reduced to a simplistic explanation. As her husband says, he has not been her friend owing to their age difference. In the end, when the story establishes Smita as someone who was only looking for emotional refuge, Ashoke reads out from the dictionary that 'husband' is the master of his household, not a friend of his wife. The reference to the dictionary meaning just makes the director’s objective in telling the story confusing. 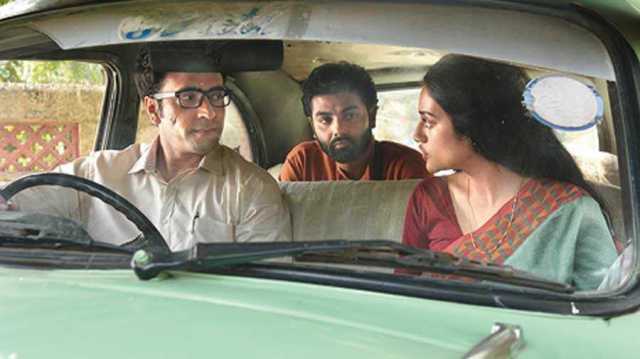 While in Mak’s story the dictionary plays an important role in his search for the meaning of a word that shakes his presumptions, in Smita’s narrative, the dictionary just confuses the meaning of relationships that she has been so desperate to find out. Put simply, Smita’s story simply becomes the account of a wife who gets involved in an extramarital affair and then, after learning that the relationship has no future, returns to her husband.

The film also cannot boast of memorable performances. Mosharraf Karim is quite dramatic, perhaps in an attempt to make his presence entertaining. However, the weak screenplay and superficial dialogues serve to make his performance melodramatic.

Nusrat Jahan does not have much scope to lend layers in her performance. Abir Chatterjee appears natural and decent, quite like his character of an introverted husband.

Arna Mukhopadhyay has infused layered facial expressions of a lover who is initially passionately involved in a forbidden bond, only to gradually slip into a relationship sanctioned by society with little empathy for the dejected Smita.

Prabuddha Banerjee’s background score does bring some relief to Smita's narrative, with haunting folk tunes that aptly fill the void in her and Ashoke's lives, on the backdrop of the dry forests and serene locations of southern Bengal.