Taut, edgy and packed with stellar performances, Dial 100 marks writer-filmmaker Rensil D'Silva's return to the director's chair after six years. While the film works to a certain extent, with Manoj Bajpayee, Sakshi Tanwar and Neena Gupta stealing the show, it is lacking in certain departments.

Senior inspector Nikhil Sood (Bajpayee) is manning the control room of the Mumbai police one rainy night when he receives a call that changes everything. The mysterious caller, Seema (Gupta), initially seems like a crank but we learn that she is a painful and guilt-inducing shadow from Sood's past. The troubled law enforcer, who frequently battles with his wife Prerna (Tanwar) over his son, wishes that his ordeal ends soon. Yet, as he tragically discovers, there are deep and disturbing connections between Seema and his family, more precisely, his son. 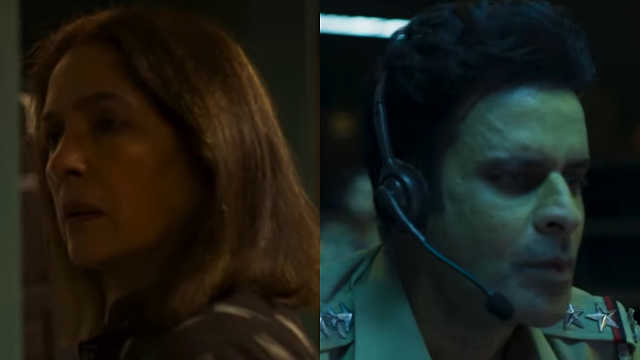 D'Silva layers the film with intrigue and builds suspense through simple conversations. This takes some time and slows down the pace of the film in the beginning. But once it gets moving, the screenplay is riveting. There are red herrings that are well placed throughout the story.

There are some flaws as well. Despite the well-balanced screenplay, the storyline is fairly predictable. Once the initial suspense clears, it is easy to connect the dots and keep your finger on the story's thread. As gripping as the premise is, the dialogue by Niranjan Iyengar slows down the pace of the film considerably. There are moments when the lines feel too forced or contrived not because of the delivery, but the language and tone.

The script, which was written by the director, is boosted by the presence of three solid performers. Bajpayee is steady and quite effective as the beleaguered Sood. His sense of duty, guilt, and irksomeness make for an interesting watch. While Gupta has not played a character such as this before, she brings a subtlety that makes her anger all the more effective. Tanwar also delivers as the mother caught in the crossfire. Her breakdown, in the end, is a highlight. Nandu Madhav makes a short, almost blink-and-you-miss-it appearance that makes an impact.

The film makes an interesting observation on the nature of justice and the systemic flaws that deny it, which adds weight and sets it apart from similar thrillers. This weight, however, becomes a burden as the film drags on towards the denouement.

While the film marks a decent comeback for D'Silva, it could have been much more.