Dhamaka review: Dramatic thriller which bites off more than it can chew

Kartik Aaryan plays a journalist caught in the crosshairs of television ratings, truth and ethics in this far-fetched drama by Ram Madhvani.

The world of Indian television news lies exposed in Ram Madhvani’s Dhamaka (2021), which features Kartik Aaryan as cut-throat journalist Arjun Pathak willing to do anything to get on the air live with a scoop. A remake of the Korean thriller The Terror Live (2013), Dhamaka tries to shock and awe but ends up making little impact.

As the ordinary day begins, Pathak is dealing with a personal and a professional setback at the same time; having been served divorce papers, he is now relegated to radio from the same network, TRTV, where he was once the top television anchor.

Working on a morning show, he receives an alarming call from a construction worker, Raghubeer Mhata, who threatens to blow up Mumbai’s Bandra-Worli Sea Link. Pathak doesn’t take him seriously and is alarmed when Mhata goes through with his plan. As Mhata is only willing to speak to him, the former fallen anchor plots a plan to get an exclusive rather than informing the police and reclaim his old spot on Bharosa 24X7.

Estranged from his reporter wife Saumya Mehra Pathak (Mrunal Thakur in a special appearance), Arjun has a point to prove, but he is not in control of the situation as he thinks he is. Mhata is a desperate but discerning opponent who once worked on the bridge and is now frustrated with the system. He is looking for an apology from minister Jaydev Patil who was indirectly responsible for the last-minute repairs which led to the death of Mhata’s co-workers.

Back in the newsroom, Arjun and his boss Ankita (a slick Amruta Subhash) work on an angle to “sell the news” and raise their ratings. Arjun, first shown as a ruthless journalist who wants his reclaim his former glory, changes his colours once he comes to know the whole truth. 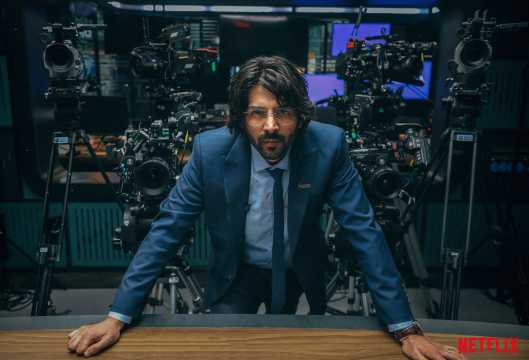 As the stakes keep rising and the bridge becomes unstable, endangering the lives of those still trapped on it, Arjun tries to lamely negotiate a deal but to little avail. Madhvani and co-writer Puneet Sharma hammer in the fact that the news is a production just like any other programme. At several points, the TRTV team and their rivals violate many journalistic ethics and never bother to check facts or examine any of the points being raised by Mhata.

In the race to be the first to break the news, the unfazed Ankita gives the rattled Arjun a pep talk in which she asks him what is an anchor. An anchor is an actor, he responds. She presses on: what does the actor want? An audience, Arjun says, and both agree that the audience wants drama. This crude but on-point exchange sums up the rest of the feature which raises salient points but opts to drop more twists in the tale instead.

Dhamaka shows the cruel, effective way news cycles turn the victim into a villain and how the media shapes, influences and changes the narrative to suit themselves. In the end, nobody wants the truth, a bitter Arjun tells Mhata.

Thakur, who appears mostly in video footage, can’t fully develop her character to leave an impact. Amruta Subhash and Vikas Kumar as counter-terrorist unit head Praveen Kamath lend able support as Arjun’s guide on the other side of the newsroom.

It’s left to Aaryan to carry the action to its conclusion. The actor is attempting something different from the usual mainstream fare and he has his moments in this flashy thriller, but eventually he can’t rise beyond the outlandish plot and the severity of the matter.