Directed by the late Rajen Kothari and Dayal Nihalani, the film is a stark portrait of life within a broken system that spares no one.

Das-Capital: Gulamon Ki Rajdhani brings to mind a short story this reviewer read back in school, Kafan (Shroud) by Munshi Premchand. The film possesses the stark realism, sardonic sense of humour and heartbreaking tragedy that defined the work of one of India's greatest writers.

Directed by the late Rajen Kothari and Dayal Nihalani, Das-Capital tells the story of an inescapable cesspool of corruption that does not spare the best, let alone the good, living in it.

Purushottam Ram (Yashpal Sharma) is a lowly cashier in the block development office in a small town in Bihar trying to eke out a living. He is but a lowly fish trying to get scraps while the sharks around him are in a feeding frenzy. Corruption is not a crime, it is a way of life. From the minister of the state to the compounder in a village clinic, everyone indulges in it. Your ascent in this hierarchy depends on how good you are at it. 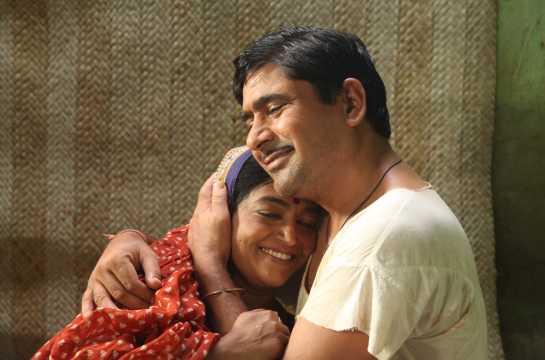 Purushottam Ram works hard, but every penny slips through his fingers. As his needs grow, so does the greed of his superiors. With a growing family, he is slowly descending into despair. As a member of a scheduled caste, he has no choice but to follow in the footsteps of his corrupt superiors. Except, when he tries to make a little capital for himself, he is quickly robbed of it.

When Purushottam Ram suffers a stroke, he experiences the other side of the corrupt spectrum. His wife Suchi (Pratibha Sharma) has to face the put-downs of his colleagues who take their pound of flesh from his income.

To the outsider, Purushottam Ram is just another corrupt government official. Yet, within the office, he stands far too low in the hierarchy and his attempts to rise above his station are squashed mercilessly. When an inter-office rivalry begins, it is he who faces the fallout while the senior, and richer, officers get away by bribing their superiors.

The film is both a satire and a tragedy. The name of the protagonist refers to the ideal man (who hails from Janakpur), who is slowly turned into a helpless, conniving cog in a corrupt machine as the story progresses. While he works hard, his work itself is corrupt. From enabling the corrupt to serving them, he does it all with the purpose of enriching himself. But it comes at a heavy price.

Shaiwal's story captures the cosmos and the inner workings of government offices in small talukas. The battles within the office, the hierarchy, and the deep-rooted corruption are captured in detail. The colourful incidents that occur in the world around Purushottam Ram range from funny and sardonic to surreal and downright tragic.

The side story of a similarly enterprising crook, Shivratan (Ravi Jhankal), mirrors Purushottam's tragedy in an interesting manner. In the end, the latter manages to survive the vortex by losing the one thing he had wished for so dearly at the beginning of the film. The other interesting character is the honest and faithful Rambaran. who stands by the protagonist through his struggles.

This world is enriched by wonderful performances led by Yashpal Sharma. The actor is compelling as the trapped Purushottam Ram. He is alternately conniving and kind. As his wife, Pratibha Sharma creates an impact with her short and sweet role. Jameel Khan, as the BDO superior, enhances the film with his performance. The actor's tics and accent make for an interesting character.

The rest of the cast, all of whom have since gone on to become familiar names, such as Seema Pahwa, Manoj Pahwa, KK Raina, Rajpal Yadav, Rajshri Deshpande, Rajendra Sethi and the late Asif Basra, is amazing. The odd man out, perhaps, is Rajpal Yadav, who makes a blink-and-you-miss-it appearance as the DM.

The screenplay is good, as the story moves swiftly from event to event while weaving a complex web of character interactions. With each personality guided by their own motivations, the film is as non-judgemental of its characters as a classic short story. There are moments when the pace sags a bit, but the film is redeemed in the second half, which witnesses a rapid series of developments.

The cinematography is simple with no frills attached. Kothari and Nihalani's direction keeps the focus on and around their protagonist. It is effective and keeps the narrative anchored. Another wonderful addition is the music of Amod Bhatt, which adds a layer of authenticity with its folk tunes.

Made eight years ago, the film feels a little dated in its interior production, but its context, story and performances cannot be faulted. In an age when politicians continue to harp on the same issues of corruption, unemployment, poverty and discrimination, Das-Capital captures the ruthless manner in which corruption mars the lives of the less privileged.

Das-Capital is now available on the Cinemapreneur platform. Click here to watch the film.

The constant need to crack jokes and the lame one-liners ruin even some sincere emotional...

The dark comedy, written and directed by Srijit Mukerji, looks at the growing man-animal conflict in...

The 70-minute documentary bagged the Rajat Kamal for the Best Biographical Film at the 65th...