Daaka review: Exciting heist film that leaves one in splits

The film starring Gippy Grewal and Zareen Khan is an enjoyable watch despite the stretched narrative.

Starring Punjabi actor, singer and screenplay writer Gippy Grewal and Zareen Khan, Daaka (2019) is a heist film by Baljit Singh Deo, who has previously directed the extremely successful Mirza: The Untold Story (2012) and Manje Bistre (2017), both with Grewal as the leading man.

Shinda (Grewal) and Balli (Rana Ranbir) are two friends trying to make something of their lives, but fate deals them one tough hand after another and they fail to catch a break. Shinda is also trying to woo his lady love (Khan) but needs to earn some money before he can broach the subject with her father.

When all schemes to earn money fail, the friends plan to loot the village bank. This is when their fate becomes intertwined with that of the criminal Sukhchain (Hobby Dhaliwal), who is wanted by police for a Rs50 crore fraud. When things start to go south, it is up to Shinda to use his brains and make things all right again.

Like most Punjabi films, Daaka has a bit of everything — romance, action, situational comedy, and drama — but this one, in addition, has suspense, and that makes it all the more interesting. The lovable rogues find themselves out of the frying pan and into the fire, thanks to comic blunders, and the suspense keeps one guessing how things will pan out in the end. 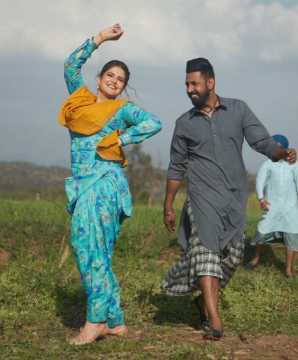 Unfortunately, the film is needlessly stretched and tends to go off on tangents, especially in the first half. The second half picks up though and maintains its pace. A crisp plot that concentrated on the suspense and drama would have made this a much more enjoyable watch.

The performances of the artistes are noteworthy with the exception of Zareen Khan whose static expression remains unfazed in the precious few scenes she appears in. Grewal is a seasoned actor and his confidence shows on screen. He is the glue that binds the film together and his chemistry with Ranbir keeps the audience in splits.

Kudos, also, to Grewal for the story and screenplay of the film, which is another feather in his cap. Dhaliwal is excellent as the scheming fraudster and is the perfect foil to the seemingly upright police inspector played flawlessly by Mukul Dev.

That Deo, who is also the film's cinematographer, has an eye for detail is evident in the framing of the shots and the sense of drama that is created. The music is enjoyable, though it appears at random without warning. But as Indian audiences, we are well prepared for the leaps of imagination that films demand of us!

The Dussehra release looks at issues of single parenthood with dollops of humour....

The Punjabi-language film is a comment on our modern lifestyles that leave no time for family....

Qismat 2 review: This drama of pining lovers is a snoozefest

Ammy Virk, whose forte is comedy, is all at sea in this long-drawn emotional drama....