Crackdown review: Gripping spy series that relies too much on tropes

The Voot Select web-series stars Saqib Saleem as an agent out to thwart a national terrorist threat by any means necessary.

Another web-series, another terror threat storyline. This time, Voot Select's Crackdown sees the Research & Analysis Wing (RAW) and its covert unit of spooks, the Directorate of Operations, in an all-too-familiar race against time to neutralize sleeper agents while nihilistic terrorists sow chaos and destruction.

The series opens in Kathmandu, Nepal, where Saqib Saleem’s Riyaz Pathan, RP to his mates, is spearheading an important counter-terror mission. He has assigned Divya (Shriya Pilgaonkar), the convenient doppelganger of fallen terrorist Miriam (also Pilgaonkar), the expected task of infiltrating a terror cell and contacting their main man.

RP is amply backed by RAW chief Ashwini Rao (Rajesh Tailang) in this clandestine mission. This infuriates deputy chief Zorawar Kalra (Iqbal Khan) who feels undermined and left out. Seeing red, he initiates a parallel plan of action. Kalra has a bone to pick with RP, whom he comes to distrust after a botched mission to Pakistan. But for the sake of the country, the two work hand in hand to unmask the culprits behind terror attacks in the nation’s capital.

The first half of the eight-episode web-series, directed by Apoorva Lakhia and written by Suresh Nair, is gripping and tension-filled. As the action shifts from Mumbai to Srinagar to Delhi, unforeseen scenarios play out that floor you and leave you wondering what will happen next. That a regular beautician could be groomed to pull wool over the eyes of hardened radicals seems improbable, but somehow the series and Pilgaonkar make it work.

In the second half, the team strives to de-escalate the terror threats, with the eventual pieces of the puzzle falling into place, revealing how confidential RAW intel was being accessed by the terrorists. 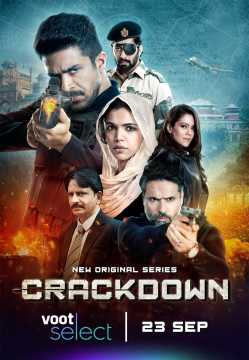 Here, the plot dips in plausibility, and predictability sets in. This is due in no small part to the plot's weakest link, Zorawar, and Khan’s portrayal of the character, which brings to mind a petulant teenager rather than a seasoned RAW second-in-command.

Saqib’s laconic RP leaves no room for doubt as to who will eventually save the day, and he largely does, ripping his top, Salman Khan-style, while going toe to toe with a baddie. He feels largely responsible for Divya and the two share a strong handler-asset relationship, though there might be stronger emotions at play that bind them together.

Saqib and Pilgoankar, as the leads, do enough to keep us curious to the end about their respective character's fates. Their loyalty is often questioned but they somehow remain remarkably calm given the stakes.

The rest of RAW crew from Tailang to Ram Menon are well cast, but unlike another show, The Family Man, about ordinary men who undertake extraordinary missions to safeguard the nation, Crackdown is sorely lacking in the heart and humour departments.

Also, the constant use of profanity, especially English cusswords, in the dialogues feels out of place for certain characters.

Fasahat Khan’s cinematography transports one right into the forefront of the action. Particularly commendable is his use of bird-eye drone footage which excellently establishes the lay of the land. The action sequences in the finale, however, needed to be a little grittier to appear believable.

Lakhia, in his digital debut, keeps our interest piqued, but the screenplay eventually resorts to cliches, which just becomes formulaic. Crackdown ends suggesting the action is far from over, a technique most series seem to be employing these days. Despite this, it would be interesting to see what RP and his crew get up to next.