Commando 3 review: Vidyut Jammwal returns as the unstoppable man on a mission in this relentless drama

There is only so much of fast cuts, bone-crunching sounds and an amped-up background score that one can take in two hours and 13 minutes.

How well can action star Vidyut Jammwal fight? Let Aditya Datt's Commando 3 (2019) show you the ways. Jammwal gets in a knifefight, a gunfight and a fistfight in this patriotic drama. Wait, that's not all; there is also a motorcycle chase and a car chase in which the hero is rescued by helicopter. If these sentences begin to intrigue you, then Commando 3 is just the film for you.

For the rest of us, Commando 3 feels like a barrage of action sequences wherein the story and screenplay by Darius Yarmil and Junaid Wasi takes a while to register and when the action begins to kick in, the second half takes it to a predictable end.

Jammwal returns as Karan Singh Dogra, the man who will unmask the mysterious Islamist leader who has been recruiting young boys, Hindu and Muslim, in a grand attack on India. In this instalment, Dogra's boss is Roy (Rajesh Tailang) who brings in Dogra to find and stop the impending terrorist attack. This time, however, his hair is tamed and pulled back in a trendy man bun, which he adjusts before pummelling his opponents.

Dogra's investigation points towards London, England, where the masked man is recording his messages. So Roy sends his commando, accompanied by Adah Sharma's Bhavna Reddy (also returning from the second instalment), to the British capital to work with British intelligence to stop the attacks which are due to commence on the holiday of Dussehra.

The two Indian intelligence officers with their devil-may-care attitude team up with Mallika Sood (Angira Dhar) and Armaan Akhtar (Sumeet Thakur) to hunt down the terrorist leader. The dapper restaurateur Buraq Ansari (Gulshan Devaiah) is a formidable antagonist to the team. He sends his men after the foursome but doesn't count on them discovering his one weakness, his young son Abeer (Atharva Vishwakarma).

Jammwal's character is unstoppable even when he is outwitted by Ansari a few times. Even on the verge of deportation from England, Dogra does not budge from his mission of capturing Ansari and stopping the attacks from taking place in India. The relentless pace of the film begins to wear you down as each scene is just another setup for another action sequence where Jammwal emerges victorious.

That said, the fight sequences in the UK, designed by the Andy Long stunt team, are thrilling. Jammwal completely throws himself and his body into these fluid moves.

Dogra is backed by two capable teammates in Mallika and Bhavna, but, sadly, the film doesn't give them that much to do. The movie does allow their characters to squeeze in a moment or two of flirtation, but, overall, they take a backseat to Dogra. Datt's film trains its lens on two men, Dogra and Ansari, and the actors who play them. 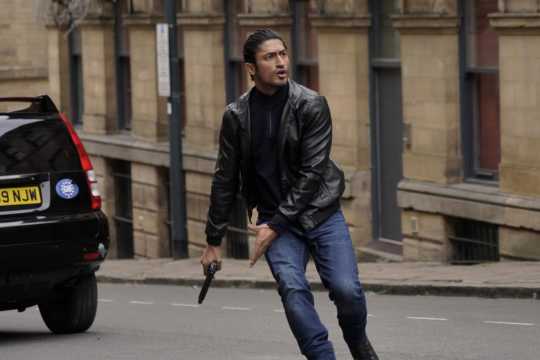 While Jammwal has two modes, fight and intense concentration, as he tries to bring down Devaiah by sheer force of will, Devaiah shows the volatile and truly villainous side of his psychopathic character. His moments of calm are replaced by intense rage where he threatens to go off the rails. Amongst the cast, he seems to have put the most effort into his characterization.

However, Devaiah's intermittent use of a British accent is an odd choice; even his young child doesn't speak in an accent, so why Ansari slips in and out of his accent is a puzzle.

Datt relies on the two leads and the action to guide him and there is only so much of fast cuts, bone-crunching sounds and an amped-up background score that one can take in two hours and 13 minutes.

The film hurtles towards a lacklustre second half where Jammwal's Dogra calls upon India's Muslim citizens to take it upon themselves to save the country in a plea for communal harmony. If you have been paying attention, you could spot this from the start, as the climax borrows an element from Milap Zaveri's Satyameva Jayate (2018) as Dogra finally figures out which cities in India are being targeted.

Eventually, all's well that ends well, as Jammwal's Dogra lives to see another day. If this instalment does well, Dogra and company could be back to school us on yet another topical issue. Let's hope not.