The Netflix film’s central characters wade in and out of a tale that is more dreamy than actualized.

A brother and sister who are poles apart, a mysterious stranger, and a fraught family setting form the backdrop of Netflix’s Cobalt Blue (2022). The drama explores the romantic and personal aspirations of Tanay (Neelay Mehendale) and Anuja (Anjali Sivaraman) and how their paths shortly intersect for a while, only to take them in opposite directions.

Set in 1996, in Kochi, Kerala, the feature revolves around the Dixit family who have settled in the southern state since the 1980s. The Maharashtrian family lives in an old, sprawling house behind the offices of a spice exports company.

Recovering from the sudden, consecutive deaths of elders in the household, the family arranges to allow a paying guest to take the top floor and plans for the wedding of eldest son Aseem (Anant Vijay Joshi). Both have lasting consequences on their future.

Tanay is immediately taken in by the new paying guest (Prateik Babbar) and fascinated by the artwork and installations he makes. The colour blue is almost always present in the frames that they inhabit together. Soon, they embark on a clandestine, passionate relationship which devastates Tanay when it ends abruptly. 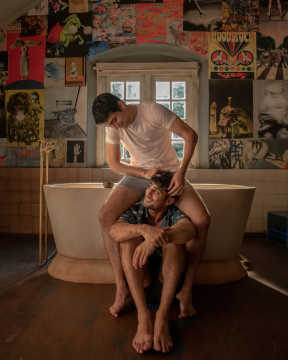 It turns out that his sister Anuja, who couldn’t see beyond hockey, found a connection in the nameless stranger as well, and elopes when her parents push for an arranged marriage. The parents, played by Shishir Sharma and Geetanjali Kulkarni, are constantly worried about their place in proper society and continue as if nothing is amiss.

With a dutiful older son, the actions of their youngest embarrass them and when she returns, alone; they force her to yield to their wishes. Both Tanay and Anuja, chafing against what society expects of them, and with their own desires for their futures, break out in different ways, yet always against their family.

The story and screenplay is by Sachin Kundalkar, who has adapted his own 2006 Marathi novel into a feature. Strangely, the film does not contain any director’s credit. The result is an odd pairing; even as the visuals draw you in, the overall arc of the feature and where it is going leave you confused.

The languorous pace of the film doesn’t help. As the background music by Clinton Cerejo and the stunning, almost poetic cinematography by Vincenzo Condorelli linger to emphasize certain moments, objects and events, reminding us of their importance, it confounds us with its passage of time. How long does Anuja disappear? How long does the guest stay with them? These are just the tip of the questions that form.

Mehendale has the wide-eyed curiosity of a newcomer; however, in most scenes, he comes off as distant, even as he pours out his soul via his writings and poems. Anjali Sivaraman as the tomboyish younger sister is effective in her scenes, but we don’t know much about her apart from the fact that she yearns to go against her family’s expectations of what a young woman should do in life. 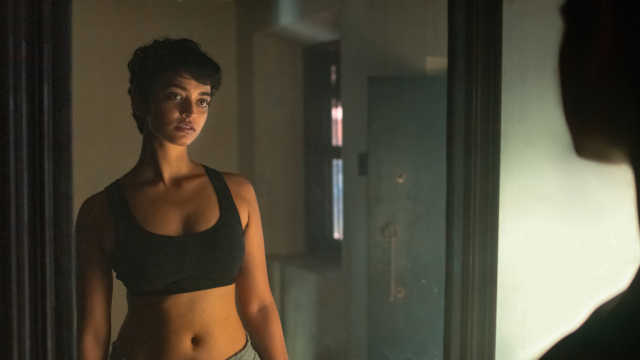 Babbar, as the nameless stranger, remains an enigma even as the film ends and we never know him beyond his brief but meaningful flings with the siblings. Sharma, Kulkarni and Joshi enact their parts well, but again, as we see them through Tanay and Anuja’s eyes, aside from a brief flashback scene, we only see part of the characters.

Neil Bhoopalam, as Tanay’s closeted professor, with whom he strikes up an ill-advised affair, is meaningful in his small part. His speech to Tanay about his own past is heartbreaking and a harsh reality for many before section 377 of the Indian Penal Code was abolished. Poornima Indrajith stands out as the nun Mary and Dixit family friend who sees something of herself in Anuja’s rebellion and tries to help her.

As an LGBTQ love story, Cobalt Blue has its moments, especially as it normalizes and captures male desire. But the story does a disservice to its characters by not developing them in a meaningful way for better impact. Instead, they wade in and out of a tale that is more dreamy than actualized.