The 3D animated feature is a definite improvement for Indian animation, but the children’s film could have done with a better script.

The Dholakpur gang, consisting of Chhota Bheem and his trusty friends, help Chinese emperor Jian and his daughter, princess Kia, restore peace to their kingdom in this latest instalment of the film series.

Bheem and the gang are in the Middle Kingdom, participating in an international competition featuring opponents from Russia, Africa and, of course, India.

The talented gang gets invited to the royal palace by princess Kia and her friend Ming, a Kung Fu student. They all quickly become friends. But during the second round of competition, things go awry as emperor Jian’s nephew Zuhu crashes the competition to abduct Kia and make his own claim to the throne.

Princess Kia has a special, almost mystical, connection with a magical dragon, whose power Zuhu wants to usurp. Zuhu will use that power to control his clay army and take over China. But Bheem and his friends have faith and determination that they will be able to save Kia.

Chhota Bheem – Kung Fu Dhamaka, co-directed by Rajiv Chilaka and Binayak Das, is by far one of the better computer-generated productions to emerge from India. The 3D film is filled with plentiful set changes, beautiful backdrops and loads of engrossing action sequences. The popular and now beloved characters from the previous films make their debut in a new dimension and have acquired new looks as well. 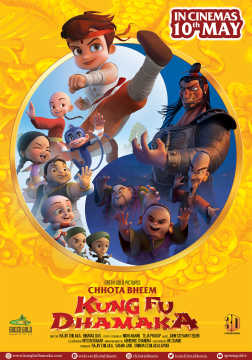 Besides Bheem, his friends Chutki, Raju, Kalia, twins Dholu and Bholu, and the talking monkey Jaggu, all get their moment in the sun. Bheem steps up to the plate to lead the rescue mission for Kia and delivers, turning Zen and Kung Fu master in the feature film.

But here and there, the production falters. Practically every scene uses a moving camera, and in this frantic 3D action adventure, it becomes a bit much. Good films know how to use to use 3D wisely, incorporate it in such a manner that you forget about the technicality of it all and get invested in the story. That is not the case here.

While the animation on the whole is an improvement, the characters lip-synching with the dialogues looked off too often. The songs in the film are completely unnecessary (including one with a Horlicks promotion) and only young children might be able to withstand it.

Furthermore, the biggest culprit here is that the film does not have an engaging enough script. The jokes penned by Nidhi Anand and Teja Anand are few and far between and slapstick humour is often used to generate a laugh. The arduous journey to get princess Kia back features many detours that could have been streamlined.

As Indian animated films have looked to the West to improve their technical skills, they should also work to strengthen the storytelling. However, fans of Chhota Bheem will have plenty to enjoy in this film as their hero rises to the challenge and takes on the evil Zuhu.