Chandramukhi review: Go with low expectations and you just might enjoy this overstuffed melodrama

Chandramukhi is not just the love story of two unlikely people. It is also a tribute to Maharashtra's old and rich culture of lavni and poetry.

Prasad Oak's Chandramukhi (2022) is not just the love story of two unlikely people, but it is also a tribute to Maharashtra's old and rich culture of lavni and poetry. Unfortunately, the filmmaker has not succeeded in making his way between these two aspects. So a genuine effort to make something interesting is pulled down by overstuffed melodrama and underwritten supporting characters.

Daulat Deshmane (Addinath Kothare) is a righteous politician and happily married husband with a loving wife. One day, he is taken to a famous courtesan’s door by his peers against his wish. With no intention of staying there, Daulat is about to leave when he hears the sounds of ghungroo (anklets) and dholki (a drum). Curiosity gets the better of him, and the first exchange of glances with Chandramukhi (Amruta Khanvilkar) changes their lives forever.

From here on, Daulat may still be a righteous politician, but he is definitely not a loving and loyal husband.any more. A shared love for poetry brings him and Chandramukhi closer and soon they fall in love. What transpires after that forms the crux of the story.

This love story is doomed from the start. One is a happily married young politician who is soon going to be minister for commerce and industry while the other is a tamasha artiste almost on the verge of selling her body. So it would be foolish to think their love story will not face any stumbling blocks. It does. The first is Daulat's wife Damayanti (Mrunmayee Deshpande), who is obviously against the relationship.

Damayanti loves her husband immensely and has complete trust in him. She is not just a good wife, but also a good human being. And writer Chinmay Mandlekar and director Oak make sure not to malign her character just to make Chandra and Daulat's relationship more palatable. The film accepts that though Chandra and Daulat are in love and in an ideal world they should be together, what they are doing is definitely not ideal. As the film makes us sympathize with the wife, it puts the audience in a moral dilemma.

The second stumbling block in the relationship manifests itself in the form of Daulat's political rivals who are eagerly waiting for him to make one slip which will give them the upper hand. Daulat's biggest rival is Nana Jondhale (Rajendra Shisatkar) who will stop at nothing to destroy Daulat's political career. And this extramarital affair can become the catalyst for his downfall as a politician. 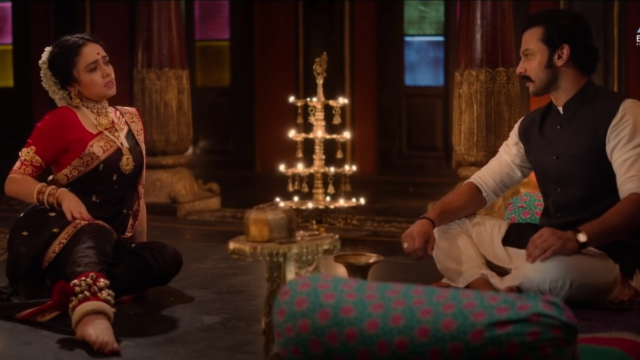 Mandlekar's writing is a mixed bag. On the one hand he has written some beautiful and delicate romantic scenes between the lead couple, especially in the first half. At the same time, his script does not give us anything new. The film does try to also underline how, unlike other art forms, tamasha artistes have always been neglected by the government and the people. But the way this message has been incorporated feels heavy-handed.

The film's material is quite familiar; we have seen it before. But even if the material is familar, that does not mean it cannot be presented in a new way with some interesting supporting characters. Sadly, the writer and the director have been content to use the same material without adding anything new to it.

Mandlekar has taken a lot of care to make the characters of Daulat and Chandra believable. You never feel like they are some larger-than-life characters. But the other characters in the film are not offered the same privilege. Also, for some reason, Oak has made them overact, especially Sameer Chaugule and Shisatkar. It suddenly takes you out of the film.

There is no world-building at all in the movie. We are never sure what period it is set in. The character of Daulat is not fully established. The only Daulat we know is the one who is in love with Chandra. The film never explores the other sides of his character, such as how he is as a politician, as a husband, or simply as a young man.

Apart from three or four characters, the film never cares to show Daulat interacting with anyone else. So his whole existence revolves around Chandra. Which makes his character pretty one-dimensional. Hence the scenes where he is not with her leave little to no impact on the viewers.

Same is the case with Chandra's character. We hardly see her interacting with any other character in the film. And when she does, those interactions are mostly forgettable. But her traumatic past manages to cloak this flaw in the writing. Certain scenes between Khanvilkar and Kothare are too melodramatic, at least for my taste. Maybe if the makers had dialled down the melodrama a little, those scenes would have made a bigger emotional impact.

The film also believes in telling rather than showing. We are told that Daulat is a rare politician who actually cares for the people and works for them, but we never see that. If he genuinely cared for the people, the film should have shown us how spending all his time with Chandra had affected his work and the people he represents. That would have added an interesting dimension to his character and the story instead of using the caricature of a typical politician as the biggest threat.

The screenplay becomes a little too convoluted in the second half. The conflict appears superfluous and devoid of logic. The unnecessarily dragged out climax with the forced twist weakens your interest in the proceedings.

Oak, who has worked in many daily soaps till now, knows how to manipulate the emotions of the audience with certain scenes. And it is quite evident, especially in the scenes featuring Kothare and Khanvilkar. But as already mentioned, this priviliage is not afforded to other characters. You can see the director and cinematograher Sanjay Memane's efforts in the scenes featuring the lead pair. If only they had put in similar effort and care into some of the other scenes, the film would have been a visual treat.

But Chandramukhi is certainly a musical treat. Ajay-Atul's compositions are already on top of the music charts and rightly so. All songs are beautifully composed and deserve a place in your playlist. Sadly, the same cannot be said about the choreography of the songs. The title track in particular has been ruined by the substandard choreography. As if that were not enough, the sharp cuts and unnecessary camera movements spoil the picturization too. Moreover, as the music videos have already been seen umpteen times on YouTube, they don't quite make the desired impact in the movie.

Kothare does a decent job of being a man confused between love, home and power. He shows Daulat's vulnerability as well as his softer side. His character doesn't speak much and the actor has tried to express himself mainly with his eyes. But the film belongs to Khanvilkar. The actress has simply poured herself into the character. If only the makers had given Chandramukhi a bit more depth, Khanvilkar's performance would have been a tour de force.

Chandramukhi was released in cinemas on 29 April 2022.