Zakir Khan, who is also one of the writers and the creator of the show, continues from where he left off in the first season.

The first season of Amazon Prime Video’s Chacha Vidhayak Hain Humare was about how Ronny Pathak (Zakir Khan), a confused youth from Indore in Madhya Pradesh, fakes his association with a member of the legislative assembly (MLA), Ashwini Pathak (Abhimanyu Singh), because of their common surname to raise his own stock among friends and city folk.

The season ended with Ashwini Pathak finding out about Ronny’s lie and, impressed, offering him a post in his political party, Humari Party. This ensures that Ronny now actually has a chacha (paternal uncle) who is a vidhayak (legislator).

Season two of Chacha Vidhayak Hain Humare sees Ronny become an important member of Humari Party and a close aide of Ashwini Pathak in no time. Hence, he, his family and friends are sure he will get a ticket to contest the upcoming municipal election, more so after the existing corporator Maheshwariji dies of illness.

This is a rare web-series whose content is very different from the first season despite the show revolving around the same protagonist, his family and two best friends Anwar (Vyon Sharma) and Kranti (Kumar Varun). This time, along with Avantika (Venus Sharma), there is another girl in Ronny’s life in the form of Tanvi (Onima Kashyap). 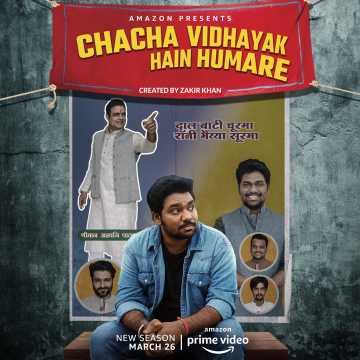 While the first season was more a slice-of-life saga where Ronny gets into trouble on numerous occasions but succeeds in extricating himself, this one is more of a political drama. The makers deserve to be lauded for managing the transition in the initial episodes in a natural manner while keeping the light-hearted mode intact.

The cold war between Ronny and Vicky is the highlight of this season and plays out and reaches a crescendo naturally.

Zakir Khan, who is also one of the writers and the creator of the show, continues where he left off in the first season. He adapts to the change in the character and the content well and carries the show on his shoulders. Sunny Hinduja’s negative act is excellent. The actor initially behaves like a good soul and you don’t even realize how he gradually switches on his negative side and becomes a full-blown villain by the end.

Abhimanyu Singh, who only featured in the last episode of the first season, gets a meaty role this time around. He commands respect and smartly switches between being caring and being ruthless.

The close bond between Ronny, Anwar and Kranti gets more moving this time around. Both Vyom Sharma and Kumar Varun excel in their roles. Zakir Hussain and Alka Amin, as Ronny’s parents, are also likeable, just as they were in the first season. Venus Sharma and Onima Kashyap chip in with impressive acts.

Despite so much going for it, the show does not succeed in maintaining its momentum till the end. After the first half of the season, the show becomes a bit too serious and sad, which doesn’t go with its theme. On top of that, the main hurdle in Ronny’s life gets solved conveniently and unconvincingly. There are also a couple of loose ends that don’t get tied up.

Chacha Vidhayak Hain Humare is still watchable, but you can’t ignore the fact that its goodness doesn’t reach the level of the first season.