Directed by Naman Nitin Mukesh, the film tries to be a whodunnit and fails.

Director Naman Nitin Mukesh’s Bypass Road (2019) was touted as a suspense thriller. The good news is that the film has suspense. The bad news is that the suspense is felt while trying to understand what is the point of the story.

So, the story (if it can be called one) revolves around Vikram Kapoor (Neil Nitin Mukesh). He is a designer and the biggest name in the fashion industry. He stays with his father (Rajit Kapur), stepmother Romila (Gul Panaag) and younger sister in a bungalow in Alibaug, Mahahrashtra.

Vikram hates his stepmother, who isn’t much older than he is. Of late, he has become close to Radhika (Adah Sharma), who has joined his firm. They have become the talking point in the office.

At the same time, Vikram has a one-night stand with his model Sarah (Shama Sikander), not knowing she is already engaged. When an emergency arises, Vikram sets off in his car at high speed and meets with an ugly accident. He survives, but he is confined to a wheelchair for life.

The happy-go-lucky Vikram lapses into a sorry state. While all this was happening, Sarah dies mysteriously. The death is believed to be a suicide. Are the two incidents — Vikram's accident and Sarah's suicide — connected in any way? In other words, is there more to the two occurrences than meets the eye? 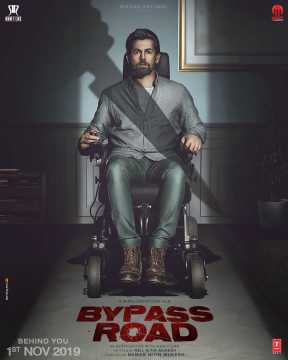 The very beginning of the film unsettles you as so much happens in the initial minute that it becomes challenging to gauge it all. Likewise, there are plenty of incidents in the first half without the narrative getting streamlined. Later, however, the tap just goes dry. After the interval, there is one non-verbal sequence that goes on for around 15 minutes. It is supposed to provide thrills but ends up testing your patience.

The fetish of the screenwriter (also Neil, incidentally) for flashbacks and non-linear narration only adds to the confusion. As it is, the story has way too many subplots. For instance: Romila (clichéd idea of a woman marrying an older man just for his money) actually loving someone else, Sarah getting possessive about Vikram after a one-night stand, Vikram’s servant Kaka (Mukesh Bhatt, not to be confused with the producer of the same name), who gets far more screen time than required, becoming the victim of the mastermind villain, Sarah’s fiancé Jimmy being on the run from the police, and so on.

The film was touted to be a whodunnit, which means the audience will get to know the culprit at the end. But instead of who did it, the question that keeps popping up in your mind is why did he or she do it? That question is answered in the final moment when the mystery unfolds. But it doesn’t provide any thrill. Instead, you wonder why the narrative took such a complicated route to arrive at something so simple.

There is no doubt about Neil’s acting potential. He showed his skills in his debut film itself, Sriram Raghvan’s Johnny Gaddaar (2007), and followed it up with more positive performances. He stood out in Kabir Khan’s New York (2009) despite the presence of stars like Irrfan Khan, John Abraham and Katrina Kaif. But thereafter his career graph has just been headed down, thanks mostly to his choice of film scripts.

One hoped that in his home production, Neil would finally feature after a long time in a watchable film. But that hope turns out to be a vain one.