Directed by Aritra Mukherjee, the film has a very fairytale-like ending, making it far removed from reality.

Aritra Mukherjee’s debut film, Brahma Janen Gopon Kommoti, has a fairytale-like “and then they lived happily ever after” ending. Hence, it is easy to surmise that the content of the film is far removed from reality. The film essentially sketches the journey of a female priest and her acceptance by her in-laws, who are steeped in superstition. The film seems to have certain agenda in mind and an extremely preachy note.

Going by lead actress Ritabhari Chakraborty’s interviews, the film was supposed to raise awareness against the stigma attached to women in many spheres of life and society. However, throughout the film, the protagonist fights for acceptance by certain people, who not only disrespect her from the very beginning but continue to humiliate her at every possible opportunity.

The transformation in her relatives comes suddenly, and in melodramatic outbursts, that too in moments of narrow self-interest. Until the time that Shabari (Chakraborty)'s in-laws discover that misfortune will befall one of the daughters of their family if they do not accept her as priest, they continue to be ignorant and flagbearers of all that is wrong with religion.

Patriarchy and adherence to age-old religious practices that consider women to be impure, are deeply connected. The film attempts to break notions around various rituals that intend to threaten women with a dangerous fate. Shabari, the female priest, is not only against the practise of kanyadaan [giving away of the bride], but she also makes sure to ask the bride to put sindoor on the groom’s forehead during the wedding to make the point that both partners are equal in a marital relationship.

However, it doesn’t show what happens when the bride is asked to touch the groom's feet as a mark of respect during the wedding rituals. Does the groom do the same to establish equality? Does Shabari also make an attempt to divide the responsibilities with her husband to implement the practise of equality in her own marital life after she too puts sindoor on Vikramaditya’s (Soham Majumder) forehead on her own wedding? 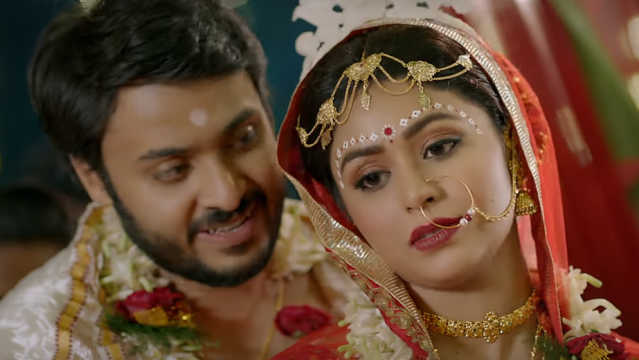 In the film, Shabari holds a very diplomatic position by conforming to many practises of patriarchy. She is a woman, who thinks wearing shakha pola [red and white bangles worn by married Bengali women] is a show of respect to the expectations of the relatives. She also doesn’t raise her voice before marriage with Vikramaditya, even when his family insists on matching their horoscopes.

She is a woman who doesn’t want to disturb the status quo at her in-laws in the beginning. She goes to college to teach as a Sanskrit professor and performs her puja as a priest, clandestinely. She is believes in changing the system by staying within it.

However, the circumstances which lead to the family members suddenly getting rid of all their reservations is simply a matter of coincidence. In reality, such circumstance might never arrive and women like Shabari might continue to conform. Here the question arises, whether Shabari’s method of battle makes sense at all!

The film has archetypal characters. Shabari’s mother-in-law and a widowed relative have been deliberately demonised to show how women are instrumental in sustaining the evil cycle of patriarchy. However, the director and screenplay writer Zinia Sen, do not care to reveal the reason behind the saturated frustrations which turn women into such insecure and vulnerable souls, who consider it safer to follow the restrictions that once oppressed them too. The sketching of characters appears with all the men in the household portrayed as submissive and conforming, till they find a voice through Shabari.

The film's characters don’t go through any gradual transformation but change overnight. Shabari's husband Vikramaditya seems to be an insignificant soul until he decides to stand with her against the hypocritical and evil local priest (Subhasish Mukherjee). However, it is also important to notice that Shabari decides to turn more vocal after Vikramaditya assures her that he thinks she is a woman who can change society.

Shabari has been portrayed as the ideal married woman, who manage her professional and personal life with equal finesse, without a moment of fatigue. She teaches, she works as a priest, she cooks at home, she teaches a kid at home, plays with him and forms a friendship with the daughter of a widowed relative, and yet seems super fresh throughout the day.

In the end, not only do the women in the family change, but all the dysfunctional chords in everyone's life are sorted too. Though both Chakraborty and Majumder claimed that they intend to start a dialogue about the changes that need to be made in society through the film, the movie itself paints a picture of an apparently ideal world, which requires no struggle by and for women. 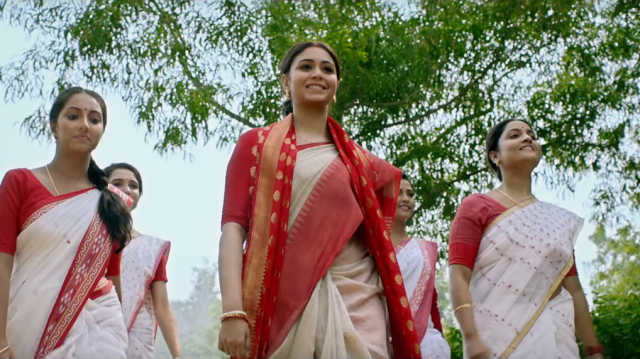 Aalok Maiti has shot the film by keeping a beautiful look throughout. The frames are a delight to look at, and they also enhance the archetypal features of the characters. Rudraneel Chowdhury’s background score goes with the loud temperament of the film, assuring it to be an ‘entertaining’ film at every possible second.

Chakraborty simply seems to be reading out her dialogues, without any modulation in delivery. Her expressions lack intensity. She also seems to miss the continuity of shots during the sequence, when her mother-in-law and Vikramaditya arrive at a wedding where she is officiating as priest. Her eye level doesn’t match their level and they seem to be standing as she looks at them, without much shock at having her secret out.

Majumder continues to speak in a particular tone, throughout the film, which doesn’t add to his character. The sequence, where he keeps rambling before Shabari about not chanting the kanyadaan mantra, is badly written and definitely needed better dialogues.

The actress who plays Shabari’s mother-in-law is quite dramatic, as per the requirement. So is Manashi Sinha. Ambarish Bhattacharya is as decent as his character. Mukherjee portrays the shrewd character of the evil priest, retaining a comical touch when he tries to engage in an extra-marital affair. However, his portions could have been dealt with more sincerity.

Brahma Janen Gopon Kommoti is basically an entertaining film that with some preachy moments thrown in for the sake of it. The film also deals with child bullying, inter-caste marriage and the fraud associated to astrology, by resolving all these issues miraculously at the end. It is hard to tell whether women, who fight rigorous battles everyday, will be able to relate with Shabari at all, as she seems to be far removed from the women of flesh and blood.

Directed by Sudeep Das, the film, which critiques the patriarchal mindset, boasts a by Indrani...

Shrimati review: Despite sincere message about self-love, this drama is a one-time watch

Directed by Arjunn Dutta, the film celebrates homemakers' choice to live life on their own terms...

Aay Khuku Aay review: A melodramatic tale of a father and daughter's struggle with poverty

Actress Ditipriya Roy and Indranil Mukherjee’s cinematography shine in this outdated film by...