In keeping with the age of the Boyz, writer Hrishikesh Koli goes overboard with dialogues and repartee that are downright offensive.

Boyz 2 picks up where Boyz (2017) left off. After Kabir (Sumant Shinde), Dhongya (Parth Bhalerao) and Dhairya (Pratik Lad) become friends following their tumultuous Class 10, they are now faced with a new enemy.

Degree college student Naru (Rohit Chavan) is the trustee's son who is admitted again and again to the college. He unleashes terror among the juniors, bullying them for kicks.

The only juniors who give him a tough fight, quite literally, are Dhongya and Dhairya. They even have a committee — JUBLEE or Junior Bachao League— to 'protect' the juniors and likely victims of Naru.

In the boys' hostel, challenges are thrown and accepted, while the canteen becomes their playground-cum-fighting ring. Director Vishal Devrukhkar extracts confident performances, and it works in the film's favour.

Naru's act as the college bully is over-the-top yet quite convincing. Similarly, Parth Bhalerao is in his element. His facial expressions and comic timing make even the most repulsive dialogues seem funny. Sumant Shinde continues with his cultured vibe, delivering a restrained performance that is attractive and assuring.

The big problem, as well as the strength, of Boyz 2 is its writing. Hrishikesh Koli had a blast writing Boyz, and the audience lapped it up. Here, in keeping with the age of the Boyz, Koli goes overboard with dialogues and repartee that are downright offensive. Referring to the pretty girl as 'sweet dish' and her friends as 'chutney', Koli takes objectification to another level. There are several such instances.

Most of the writing tries to address a gamut of issues teenagers face these days — from bullying and addiction to mobile phones to the fear of missing out, the need for validation, puppy love and an unhealthy interest in sex. The screenplay picks up these issues one at a time at various points in the plot, and abandons them just as quickly. The intention seems to be to maintain a balance without blaming adults or teenagers. However, it comes across as a half-hearted attempt to make peace and bridge the generation gap.

Boyz 2 is all fun and games, but at what cost?

Writer Koli seems to draw inspiration from real-life 'boy language', using words like 'inauguration', 'ribbon-cutting', and 'rocket' that are downright repulsive. Even the songs 'Goti Soda Batli Foda' and 'Tod Fod' are full of crude sexual innuendo and misogyny. Even the teachers seem helpless. And what gives a student the right to ask a female teacher why she chose not to marry?

The story goes to Ladakh to break the monotony of the hostel and college scenes. However, the location is not used to further the plot. The visuals are appealing, and a reminder of a lost opportunity. 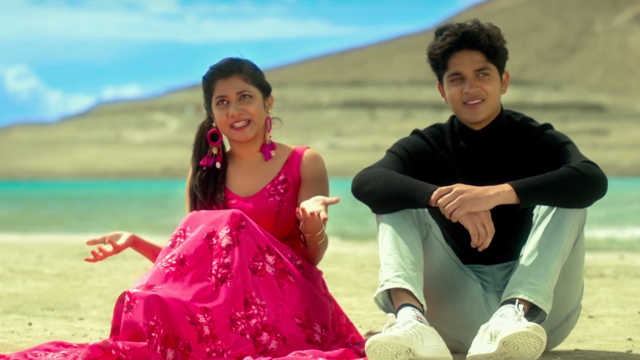 With the current trend of 'woke feminism' gaining steam, director Devrukhkar finds himself standing against the tide. He could be seen as promoting the objectification of women and the bothersome "boys will be boys" idea that is making a lot of Indian women and young girls uncomfortable.

Boyz 2 progresses well, a deserving sequel storywise, but it's a poor attempt at addressing serious issues while inadvertently promoting the sense of entitlement of some men and sexism of the worst kind in the garb of entertainment.

If crude sexual humour is your thing, Boyz 2 is the perfect weekend watch. If it's not, just revisit the innocent entertainment of Boyz and be content.

The film's important message about blind faith and its repercussions is undermined by director...

Quarter review: A deep dive into the psyche of an alcoholic

Starring Girija Oak Godbole, the short film tells a story of a middle-aged woman who has drowned in...