While the film has many flaws; however, if the audience sticks with patience, then it is possible to grow empathy for the characters and watch it till the end.

Anumita Dasgupta’s Bohomaan (2019) touches upon a sensitive issue by focusing on complexities on close-knit relationships and addresses the social taboos associated with them, without attempting to preach. The director begins to take a grip of the cinematic composition only during the latter half of the film.

The slow pace and static camerawork by Arindam Bhattacharya and the inadequate lighting in almost every frame makes it an arduous task to watch, especially the first half of the film. The lack of effort in these portions gets translated into an amateur composition which eventually gets recovered by the journey of the characters.

The strength of the film are the characters. The slow pace that initially testes the patience, also allows the characters to grow in mind in the second half. However, there are loopholes in the journey of a few of them too.

Madhuri (Aparna Sen) meets Salim Khan (Soumitra Chatterjee), her lover from her college days after many years, and at a time of her life when her son Subrata (Bratya Basu) has settled in his own life and married Joyeeta (Arpita Chatterjee). When her life is almost free of responsibilities, Madhuri happens to come across Khan, who she could never forget, despite marrying another man of her parents’ choice. 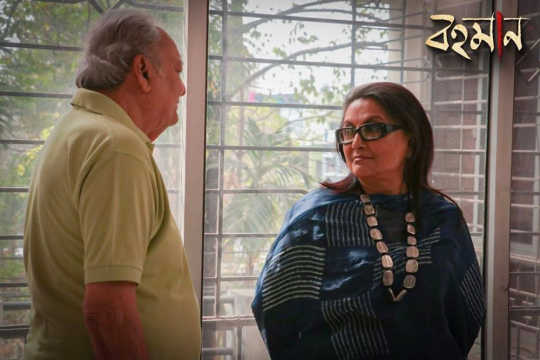 They continue to meet and recall their memories. The flashbacks here could have been avoided or maturely dealt with. Some of the sequences only add to the length of the film rather than churning out the true essence of their relationship.

It is shown that Madhuri used to be Salim’s student as well as his only love interest. Madhuri’s daughter-in-law Joyeeta also had Salim as her professor and used to have a crush on him as well. Moreover, Salim’s sudden departure from the city for many long years is stated to be the reason behind Madhuri and Salim’s separation and as well as lack of communication.

Though it is elaborated that Madhuri was out of Kolkata for a long time and hence, she did not come across him, Salim’s tenure as a professor and the duration of his underground stay seems confusing. It is also not clear how the man, who was once obliged to stay underground, could roam around freely with dignity in the present time.

One of the crucial aspects of the film is the complicated equation between Subrata, Madhuri and Salim. As Madhuri begins to rendezvous with Salim, Subrata turns insecure and becomes obsessed with his mother, and his frustrations begin to have a toll in his relationship with Joyeeta too.

On the one hand, Dasgupta presents the romance between the elderly duo as a matter of fact, without making a big deal about it. She rather treats the issue of children getting affected at their parents’ freedom of choice. The deep-rooted patriarchal notions begin to reflect in Subrata’s behaviours when it is later discovered that it is his problematic childhood that prevents him from accepting the growing relationship between his mother and her lover. 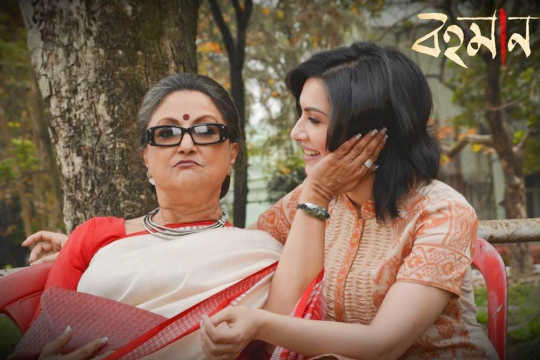 In Bohomaan, during the moments of crisis, the women support each other. Not only does Joyeeta encourages her mother-in-law to start a new chapter in her life, but Madhuri too empathizes with her daughter-in-law’s plight when Subrata’s outbursts make it difficult for her to deal with.

With a realistic approach, Dasgupta shows Madhuri thinking twice before she decides to move in with Salim at an age when humans only crave for comfort and peace rather than new trials and tribulations, despite being deeply in love with him.

The climax of the film is also quite convincing. It is not meant to shock or shake the audience, rather it brings the entire narrative into a full circle with the most natural depiction of a revelation. While certain sections throughout the film might seem like lacking connections, in the climax, they make sense.

Aparna Sen and Soumitra Chatterjee mostly act as themselves as they bring out the best of the two characters who are burdened with memories, but are yet to make the most of their remaining time.

Arpita Chatterjee has also delivered a performance in sync with the journey of her character. Bratya Basu too moulded himself well into a bundle of supressed emotions. However, Dasgupta's script makes him unnecessarily rude and abusive sometimes. He could have had more moments of inner turmoil rather his constant outbursts. His repeated ugly encounters with Salim appear redundant and the reasons behind his hatred towards the elderly man remain unknown till the end.

Bohomaan has many flaws; however, if the audience sticks with patience, then it is possible to grow empathy for the characters and watch the film till the end.