Bigil (2019), the third film from the Atlee-Vijay collaboration, is the story of a don who had to sacrifice his footballing aspirations owing to a personal tragedy. This is a story I would have loved to see take shape on screen as the rousing tale of a former champion.

Instead Bigil takes the regular masala cinema route and expands the halo of Vijay, making him appear even more heroic than what Theri (2016) and Mersal (2017) achieved in terms of pushing his stardom. Beneath the star pandering, Atlee makes Vijay coach a women’s football team and passes it for women's empowerment. He literally saves the women in a film about women's empowerment.

Michael Rayappan (Vijay) gives up on his football dreams due to personal tragedy which is the result of the violence that surrounds his life. When he gets a shot at redemption through the same violence, he takes over the reins of a women’s football team after his friend Kathir is fatally injured. All the players of the team are from the underprivileged class of society and it becomes Michael’s responsibility to win their trust and coach them to win the national championship. 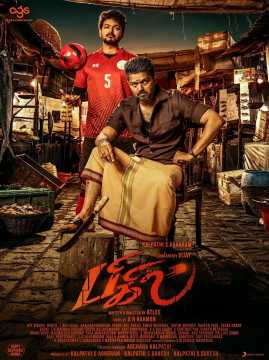 As a sports drama minus the frills, like songs and romance, Bigil could have been taken even more seriously. While it is quite evident that the film is cut from the same cloth as Shah Rukh Khan’s Chak De! India (2007), it isn’t even nearly as hard-hitting as its Hindi counterpart. As the focus shifts to the women players, wish Bigil had taken up more serious issues like dealing with a subplot about inspiring an acid attack survivor to return to playing.

Much as you want to appreciate the intent of dealing with such a sensitive topic sensibly, Bigil merely treats these issues on the surface and never digs deep to leave an impact. The whole acid attack stretch featuring Reba Monica John is pulled off sensibly and resonates strongly when we see her return to playing after the traumatic incident. However, another subplot featuring a plus-size player is handled recklessly to evoke some laughs.

Bigil is a big step up for Atlee in terms of scale and vision, and he pulls it off quite convincingly, delivering a film that works effectively as star service to Vijay, but it has a very problematic core. A film about women's empowerment should ideally be about their problems and how they deal with them on their own. Bigil ends up projecting Vijay as a messiah of women and shifts the focus on to him.

When it comes to the performances, Vijay is fun to watch in dual roles. As Rayappan, an ageing gangster, he breathes swag and plays his part more confidently than ever. However, as Michael, the former player turned coach, he does not quite impress as much as Rayappan. He repeats several of his own mannerisms from Theri and Mersal and they have started to get boring. The film redeems itself strongly in the second half, especially in the football portion.