Bheemla Nayak fails to recreate the magic of the Malayalam original but works in its own ways, thanks to Pawan Kalyan’s machismo and Rana Daggubati’s performance.

The Malayalam cult hit Ayyappanum Koshiyum (2020), about two characters who lock horns over an incident and how their egos take them on a wild trip, is not an easy film to remake. It is a dialogue-heavy film that worked purely due to the terrific performances of its lead actors, Biju Menon and Prithviraj Sukumaran.

The Telugu film Bheemla Nayak (2022), on the other hand, is an excessively commercialized remake of Ayyappanum Koshiyum that fails to recreate the magic of the original but still works in its own ways, thanks to Pawan Kalyan’s machismo and Rana Daggubati’s impressive performance.

Ayyappanum Koshiyum was instantly likeable because it was about two flawed men flexing their masculinity and stopping at nothing to prove who is stronger. Bheemla Nayak takes the safe remake route and doesn’t tamper with the soul of the original story. However, it makes minor changes to suit Telugu sensibilities and appeal to Pawan Kalyan’s massive fan following.

The story follows Daniel Shekar (Rana Daggubati) aka Danny, who is taken into custody with his stock of alcohol in an alcohol-free zone. Danny is not someone who bows down to the police. He brags about his powerful background. When he challenges the policemen, Bheemla Nayak (Pawan Kalyan) takes charge and books Danny and puts him behind bars. This sets off a chain reaction and Bheemla Nayak and Danny won’t stop till they massage their ego with blows.

Ayyappanum Koshiyum relied heavily on non-stop tension between the lead characters. While Bheemla Nayak does succeed in recreating that tension, it also adds a lot of customary mainstream gimmicks to make the film more of an entertainer. One can understand why the film resorts to an excessively commercial narrative style with a star like Pawan Kalyan headlining it, and the approach does work as it makes Bheemla Nayak so much fun. 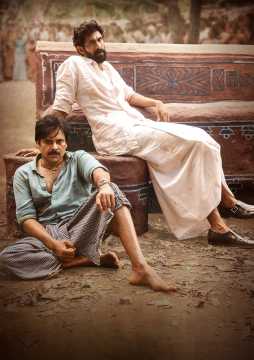 The face-off moments between Rana and Pawan Kalyan really keep the viewer invested in the story. For a good part of the film, it is the scenes between the two male leads that makes Bheemla Nayak as good as the original, if not better.

Pawan Kalyan is terrific in one of the fiercest characters he has played on screen. It is a character that suppresses its rage for the most part, but when it explodes it’s so engrossing to watch the star own the transformation, and he makes it look effortless.

Rana, in yet another unique pick, plays Daniel Shekar convincingly. He is menacing in the role and makes for a strong adversary to Pawan Kalyan’s character.

It is safe to say that director Saagar Chandra chose to make Bheemla Nayak a Pawan Kalyan film instead of giving both his stars equal scope to score over the other. Nevertheless, Rana makes a solid impact and this will go down as one of his better performances.

Bheemla Nayak was released in theatres on 25 February.