Bhaagamathie review: Politico-horror film that could have been so much better

The first half of the film is insipid and predictable and struggles with logical gaps.

An actress who delivers good films is expected to deliver only films that are at least as good as, if not better than, her previous effort. Anything less and the film runs the risk of being dismissed by fans. Anushka Shetty's Bhaagamathie finds itself in this unenviable position.

As a film, Bhaagamathie is a decent entertainer with a lot of twists and turns in the second half. The film, which has elements of a political drama and a horror film, is quite engaging despite an insipid and predictable first half.

Sanchala (Shetty), an IAS officer who is serving a prison term for killing her husband Shakthi (Unni Mukundan), is brought to a desolate house in the midst of a forest for interrogation by CBI officer Vaishnavi Natarajan (Asha Sarath).

Vaishnavi has an agenda. Her political masters have given her the task of finding evidence of wrongdoing by Eshwar Prasad (Jayaram Subramaniam), the water resources minister to whom Sanchala had served as personal secretary once.

Determined to smear Eshwar Prasad's reputation, Vaishnavi digs deep. She is certain that if she grills Sanchala hard enough, she should be able to find evidence of wrongdoing against the minister. The plan is to grill Sanchala for a few days. 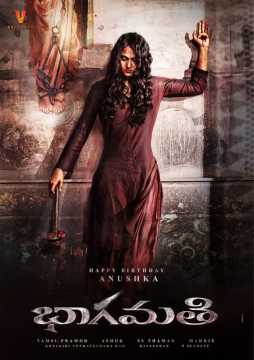 Sanchala is made to stay in the palatial structure, which locals believe is possessed by the spirit of Bhaagamathie, a woman who had ruled the area many decades ago. Initially, the police ignore the warnings of the local populace. But as certain developments take place, they begin to wonder if they were right in ignoring the rumours of the place being haunted.

Whether the makers like it or not, Bhaagamathie is bound to be compared with Shetty's Arundhati, a huge hit which had a solid plot rooted in realism. Bhaagamathie, on the other hand, has a plot that is exaggerated and unrealistic.

Take, for instance, the film's basic story. Politicians seeking to get even with one of their own set a CBI officer to search for evidence against him. Now the officer, instead of going after the politician, goes after a former personal secretary for no good reason. Next, it is hard to believe that a professional police organization such as the CBI would make a person it seeks to interrogate stay alone in a place with many exits, including, as it turns out, one of which it has no knowledge.

One can pinpoint several such lapses in logic that make the story difficult to buy. The first half is dreary. One is almost sure of what is going to happen next. In fact, the first half is so predictable that you even know where a face or shadow is going to appear next in scenes that are meant to scare you.

But that is just the first half. The second half is very different with the plot turning in every possible direction except the one you thought it was going to take. The exaggeration level too comes down and one is able to relate a little more to the plot.

If there is one thing that works for the film, it is music director S Thaman's background score. Often it is the fantastic music accompanying the sequences that leave you scared and interested. Had it not been for the music, some of the sequences might well have put you to sleep.

The film has some wonderful camera work by R Madhie, who is fast becoming popular for his skill. It also has good performances from Anushka Shetty, Jayaram, Unni Mukundan and Asha Sarath, in that order.

All these pluses, however, only leave you with a feeling of what might have been. Bhaagamathie could certainly have been a lot more than what it has turned out to be.