A brash youngster. A mysterious young woman. A dangerous gangster and a forbidden romance. These are all elements that make up the story of star-crossed lovers set in Allahabad, Uttar Pradesh. It is, in fact, a story that we’ve seen before, plenty of times.

What makes this slightly different is the star cast, as actor Aditya Rawal (son of actor Paresh Rawal and actress Swaroop Sampat) and actress Shalini Pandey have been paired as the leads. Pandey, who made her film debut with the Telugu film Arjun Reddy (2017), had a small role in Mere Nimmo (2018). Bamfaad, which translates to gutsy, introduces the two.

Aditya is Nasir Jamal, a reckless troublemaker, and Pandey is Neelam, a seemingly sweet but forward girl, who catches his eye. After he’s fallen for her completely, he realizes that she’s gangster Jigar Fareedi’s moll. Fareedi, played by Vijay Varma, already hates his guts.

Further antagonizing Fareedi, the pair elope to Lucknow where they have little success and much heartache, as they try to set up a life for themselves. When the action moves back to Allahabad, the stakes are much higher, and there is much to lose, for everyone involved.

Bamfaad, which is presented by filmmaker Anurag Kashyap, is a promising debut for Aditya, who confidently throws himself into his character, warts and all. As Nasir aka Naate, there is a gradual progression to his arc. As a son of an influential politician Shahid Jamil (Vijay Kumar), he is self-possessed and hot-tempered, not realising that those same qualities can be used against him and lead to his ruin.

Pandey, meanwhile, in her first Hindi lead role, is as comfortable with her character, but as Neelam lets things happen around her, she doesn’t get the chance be more assertive. At first, she seems the more realistic one in their relationship, but later we see that she’s starved for real affection and goes along with events as they happen. 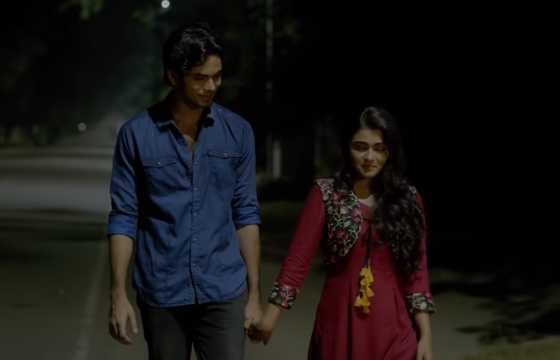 Varma, as the gangster-in-charge, seems underutilised, while Jatin Sarna, as Naate's double-timing friend, comes in and out of the story. While both actors put in good performances, it's just not enough to elevate the film.

Besides the doomed love story and Fareedi’s wounded pride, there is another sub-plot of a looming election, and a woeful tale of Naate’s Hindu friend Tota’s (Shivam Mishra) pursuance of their classmate Walia (Sana Amin Sheikh), all of which connects back to the triangle of Naate, Neelam and Fareedi.

Bamfaad has a nice, melodic soundtrack by Vishal Mishra, but it’s Prashant Pillai’s background score that makes the bigger impact as the film ends.

Ranjan Chandel, who wrote Kashyap’s Mukkabaaz (2018), gets the mood and tone right for this heartland film. However, he’s working with the same tropes and devices that many have already used before him. The inter-caste love affair, the savagery, the seething rage of masculinity, the underhand games of politics and law and order, it has been explored before.

The only thing that is mildly refreshing is its ending, which seems hopeful, after all the violence it has wrought.