Baaghi 3 review: Tiger Shroff's war on terrorism is all action but still short on entertainment

Ahmed Khan's film is an excellent vehicle for the improbably agile action star that is Tiger Shroff, but it lacks any credible emotional depth.

There was a point in Ahmed Khan's Baaghi 3 (2020) when this reviewer began to wonder how a nightclub full of Europeans exists in Syria and how the ISIS (Islamic State in Iraq and Syria) has not declared a fatwa against it yet. There was also the question of whether the Indian government is still sending its officers to Syria, and how the country has a fully functioning tourist industry.

Then I reminded myself that I should have given up on logical explanations before I walked into the theatre. Baaghi 3 is an action-packed, masala vehicle for the phenomenon called Tiger Shroff. In the face of an array of gut-punching, bone-breaking balletic moves and flying bodies, whoever needs logic.

The story begins with Ronnie and Vikram (Tiger Shroff and Riteish Deshmukh), two kids growing up with their police inspector father Chaturvedi (Jackie Shroff). As ever, Vikram is a cry baby whose only attempt at self-defence is to scream 'Ronnie', upon which the younger brother arrives and dropkicks anyone who has hurt his brother. It feels adorable when they are kids, but when this habit continues well into their thirties, you almost want to tell Vikram to 'Grow a pair, dude!' To quote Ronnie, 'Sabko aati nahi, aur iski jaati nahi [Everyone does not get it / And he can't get rid of it].'

But that's the way it goes. And voilà, Vikram signs on to become a sub-inspector at a police station in Agra, Uttar  Pradesh. Every time he has to face a goon, he asks Ronnie to sort it out. "If villains can have goons to help them, why can't a policeman do the same?" he asks. A little thing called law and order should never stand in the way of such ideas, I suppose. 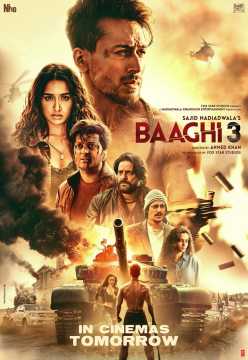 From extra-judicial killings done to wreak vengeance on an old sub-inspector to breaking down IPL's (Jaideep Ahlawat's) kidnapping ring, Ronnie is causing havoc across Agra and winning Vikram the attention of his superiors. In the midst of all this, he even manages to get his brother married to the lovely Ruchi (Ankita Lokhande) and fall in love with the bride's sister, Siya (Shraddha Kapoor).

The trouble begins when the MEA (ministry for external affairs) sends Vikram to Syria for the extradition of IPL, who had been abducting families for the dreaded Lashkar-e-Jaish head Abu Jalal. Vikram is captured by the terrorists and Ronnie takes off to Syria, to singlehandedly do what the United States of America, Israel and Russia took five years to do.

You could have understood the story from the trailer for Ahmed Khan's film. If you have decided to take the time out to watch Baaghi 3, you might feel a little disappointed. But only if you go in expecting anything different. Baaghi 3 has all the elements it promises, i.e. Tiger Shroff in close-quarter combat, firing guns, leaping off tanks and helicopters, et al. He even pulls off two particular moments as a desi Thor and, later, Captain America to boot. There are 650 muscle groups in the human body, and Shroff uses every one of them to kill his opponents.

Khan wraps up all this action in the glitzy, saccharine, emotional drama of two brothers caught in the global tragedy of terrorism. The story is adapted from the Tamil film Vettai (2012) and varies only with its venture into erstwhile ISIS territory.

Ahlawat is quirky as the bad man with a good heart, while Vijay Varma does a hilarious turn as the Pakistani pickpocket in Syria, Akhtar Lahori. This also serves to play on the 'good Muslim', who does good for the sake of humanity, across religious and national lines.

Kapoor as Siya is burdened with a half-baked character, which does not come across as an emotional anchor or an interesting love interest. The screenplay offers her little room for acting, and when it does, the actress does not always come through with the right emotions. In that, she is joined by Tiger Shroff.

While Tiger Shroff does well with the action sequences, which is his forte, he stumbles badly in the emotional sequences. Perhaps it helps that Khan's screenplay fails to invest his characters with any emotional depth. The screenplay would have been a super hit in the 1980s or the 1990s and might have even found space for three more songs. 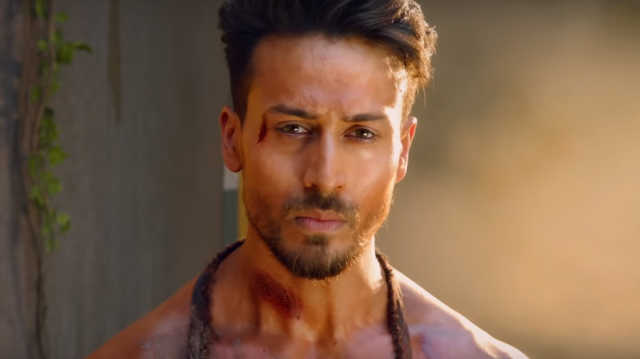 But the domineering villain, the villain's den, the item song in a nightclub and, finally, the fight-to-almost-death are all tropes taken right out of that decade. Throw in cheesy punchlines and overdone dialogues laden with puns and you have a trip back to the past.

There are also several holes in the plot, beginning from the opening sequence to the sudden transformation of IPL, which leave you with more questions than answers, one of those questions being, how does Tiger Shroff manage to do what he does? The action sequences are well-choreographed, though scarcely believable. But lacking a credible storyline, and with a certain amateurish emotional depth, the film fails to hit the home run.

Don't expect this review to have any effect on the box-office collections though. There are enough Baaghis around.