Asuran, which has revenge as its core theme, also touches upon issues like the class divide, caste and power politics.

After the gritty gangster saga Vada Chennai (2018), Dhanush and Vetrimaaran reunite for the fourth time for Asuran (2019), a blood-soaked, violent tale of revenge and redemption set against a rural backdrop. The output is not groundbreaking, but Vetrimaaran manages to dazzle once again with a film that has terrific stretches filled with action and drama. He is backed by all-around amazing performances by the ensemble cast, especially by newbies Teejay and Ken Karunas.

Asuran follows Siva Saamy (Dhanush), who has left his violent past behind and now lives a quiet life with his three children and wife. He has no major expectation from life apart from getting his eldest son (Teejay as Velmurugan) married. However, the hot-headed Velmurugan has other plans with life and can never take things with a pinch of salt.

When he crosses paths with a powerful upper-class family from a neighbouring village, Siva Saamy and his family have to pay the price. To save his family, Siva Saamy is forced to turn to violence again and walk down the same path he had chosen to give up many years ago, also for the sake of his family. 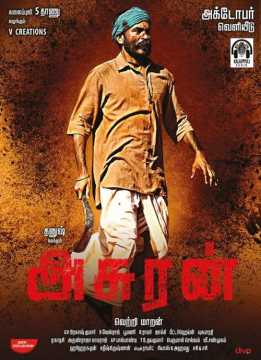 Asuran, which has revenge as its core theme, also touches upon themes like the class divide, caste and power politics. It also talks about how land is a symbol of identity for many people and most don’t mind even sacrificing their lives for it. But the flashback that introduces us to Siva Saamy’s first tryst with violence is quite flat and hardly makes an impact.

The film features Teejay (in his debut), Ken Karunas (in his first full-length role) and Malayalam star Manju Warrier (making her Tamil debut). All three are unbelievably good, but it is Ken who steals the show with a flawless performance. In the first half, Dhanush almost sidelines himself with a very subdued performance and lets Teejay and Ken take all the spotlight.

The film features Dhanush in dual roles, playing a man in his late forties and a fearless youngster in his twenties. As the older character, Dhanush is immensely likeable and proves his versatility once again in a role that perhaps nobody else could have portrayed so effectively. Manju Warrier as Siva Saamy's wife makes a solid impact. She is a treat to watch in the emotional scenes.

Asuran is the most violent film to have emerged yet from the collaboration of Dhanush and Vetrimaaran. It is definitely not a film for the faint-hearted. The haunting score by GV Prakash Kumar and the visuals by Velraj make it even more violent and the experience will hit you like a ton of bricks. Asuran could have been a lot better if only Vetrimaaran had taken care of the second half, especially the way he has handled the flashback portion.