Anubhav Sinha's follow-up to Mulk (2018) builds on a fantastic ensemble performance and a thrilling, taut script that is morally and aesthetically sound.

Stepping out of Anubhav Sinha's Article 15 (2019) and into the brightly lit night of Mumbai can be jarring. It is hard to believe that the film is the product and expression of the same country as this bustling city of skyscrapers and zooming cars. Yet, beneath the towers of Mumbai, there exists a subterranean world of people keeping this city alive.

They are the ones who build its metros, clean its gutters, serve at tables and remain nameless and invisible. Anubhav Sinha's Article 15 grabs you by the collar and forces you to look deep into the abyss in which these nameless invisible dwell. It is not a comfortable watch. It is not simple. But it is moving, like all works of art ought to be.

A sombre opening scene descends into something chilling before the audience is even ready. The bemused Ayan Ranjan (Ayushmann Khurrana) is a London-returned, privileged IPS (Indian Police Service) officer making his way through a posting in a remote district of Uttar Pradesh.

He is an outsider who does not understand the system and, at times, wishes to get out of it. But when the case of two girls gang-raped and hanged on a tree lands on his desk, Ayan Ranjan is dragged into the system. The deeper he goes, the darker the swamp is.

Anubhav Sinha's film is not just a morality tale, but a taut, investigative thriller. The screenplay is tight and has the right amount of tension and drama to keep you at the edge of your seat. With Mulk (2018), Sinha appears to have mastered the art of creating human dramas built on morality tales.

This time, though, he weaves multiple layers into the story. The subtext of caste, an oppressive system, a corrupt bureaucracy, and seemingly normal people indulging in the most heinous crimes feels like a direct statement on the zeitgeist. The film's emotional graph moves perfectly, with the high point arriving just before the intermission.

This is brought to life with some fantastic performances. Ayushmann Khurrana as Ayan shows a suppressed anger and confusion that can only be a product of honest experience. His reactions and controlled rage are tuned to perfection. There are moments when you feel for Khurrana's character, gritting your own teeth. That sense of personal involvement is the greatest praise you can give an actor.

He is joined by a fantastic ensemble cast. Manoj Pahwa as the wily, malevolent Brahmdatt is another fantastic follow-up to Mulk (2018). He plays the privileged villain clothed in geniality. He is contrasted by Kumud Mishra, playing the oppressed man who has risen to a certain position and wants to keep it, despite his own conscience. The two veterans are joined by some impressive support acts by Ashish Verma as Mayank and Akash Dabhade as Satyendra. 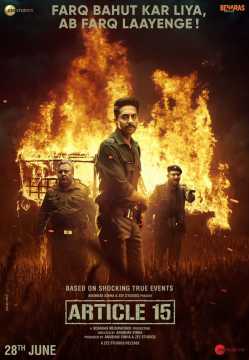 Sinha allows the story to unravel in multiple threads, slowly bringing them all together to weave an impressive story. Cinematographer Ewan Mulligan moves the camera to capture the widespread desolation, giving an eerie noirish atmosphere to the experience. It makes for some thrilling moments that can only be felt, not described. The raw, intense close-ups of the characters, or the sight of a man holding his breath to dive into a gutter, add to the texture of Sinha's experiential film. Anurag Saikia's background score does the rest.

It is through these visuals, and incisive dialogues, that Sinha explores the scar of the caste system. His portrayal of the evil that common men and women, who might otherwise be neighbours, friends, colleagues, resort to when empowered with privilege is chilling. The system is so entrenched in them that their conversations, behaviour and perception are unconsciously defined by it. The dialogues are memorable, sharp, and true to the mark. As a line in the film goes, 'These things are shown like they happen somewhere far away. But they don't."

In Hannah Arendt's essay, The Banality of Evil, the writer observed that the Nazis did not feel like they committed a crime because they felt it was their duty. Their commitment to the job made them immune to any appeal to humanity. They were simply putting a system in order.

This is the thought that darkens you to the core. The contrast of Ayan, fired up by the injustice, is Nishad (Zeeshan Ayyub, in another fantastic performance) and Gaura (Sayani Gupta, impressive), who have fought it for so long that they no longer hope for joy. Their only hope is a violent revolution that rids them of the system. But that is nigh impossible.

Every time someone tries to upset this systemic oppression, it reacts like programmed software. There is an agent sent to debug (Nassar as CBI officer Panicker), to remove the problem and return status quo.

Sinha allows the stories of Nishad and Gaura to develop as the antithesis to the relationship of Ayan and Aditi (Isha Talwar). While the latter find happiness and completion in their lives, Nishad and Gaura are ripped apart because of an unjust system. The last lines of Nishad are a wonderful addition, paying a fitting homage to the late Rohith Vemula.

But Sinha deviates from reality in the end. He does not thrust our faces in this unbearable stench of desolation. He gives us something more abstract and positive: hope. It is preferable.

In 1962, Arendt, a Jewish refugee, was tasked by The New Yorker magazine to cover the trial of Nazi war criminal Adolf Eichmann. In her essay, Arendt wrote, "Under conditions of terror most people will comply but some people will not… No more is required, and no more can reasonably be asked."

Anubhav Sinha's Article 15 asks the same of its audience. Hopefully, some will respond.