Angrezi Medium review: Irrfan Khan strikes the right notes in this emotional saga of a father and daughter

The family drama, directed by Homi Adajania, follows a first-rate Khan as a father striving to make his daughter’s dreams of a foreign education come true.

With Hindi Medium (2017), Irrfan Khan won his first Filmfare Best Actor statuette. In the film, Khan played a self-made millionaire from Old Delhi's Chandni Chowk wanting to admit his daughter Pia in an English-medium school. Though he is looked down upon for his roots and for being nouveau riche, he vows to use any means necessary to secure Pia’s future.

Like the first film, Homi Adajania’s Angrezi Medium (2020) has its heart in the right place. But the journey from Udaipur in Rajasthan to London in England becomes a bit overwrought with a complicated storyline and new characters as the action shifts abroad. Khan’s earnest portrayal of a devoted single father, however, outshines the many confusions one may have about the floundering facts of the film.

Sweet shop owner Champak Bansal (Khan), with his large, extended family, lives in Udaipur with his daughter Tarika (Radhika Madan). The largely conservative Champak dotes upon his daughter and would do anything for her. So when she decides she wants to go to England’s Trufford University to study, he reluctantly gives in.

Tarika, with the help of a tutor, studies day and night and, luckily, is chosen amongst the top three students to study abroad. But when Champak inadvertently causes a public scandal for the principal handing out the scholarship, Tarika’s foreign future comes crashing down.

It is now up to Champak to make sure she gets to London and her promising future. With the help of his cousins Gopi (Deepak Dobriyal) and Gajju (Kiku Sharda), he takes Tarika to London. But he does not factor in his understanding of English, along with his financial and legal status in the country, coming in the way. 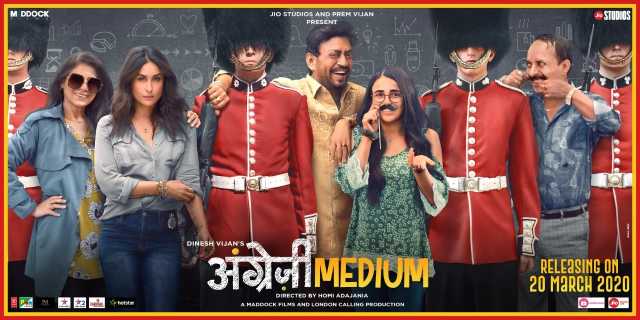 The screenplay by Bhavesh Mandalia, Gaurav Shukla, Vinay Chhawall and Sara Bodinar not only has to accommodate Champak and Tarika’s quest, it must also take into account the many characters they meet along the way in India and abroad. In the process, the story grows inflated and indulgent, and the logistics of simply uprooting oneself to England overnight (where is the money coming from?) are brushed aside for the emotional quotient.

That said, Khan in his return to Indian cinema since Karwaan (2018) is simply wonderful. Though he looks weary in a few scenes, he is honest and raw as a father who will go to any lengths for his daughter. With screen partner Dobriyal, who matches him step for step, Khan is downright funny and charming.

An early joke about hygiene, in the current germaphobe environment, lands well and the Bansal’s family with its litigious nature has its moments. Madan is also endearing as a determined young woman trying to make it on her own.

The energy levels of the film dip slightly after the interval as it leads to a seemingly irredeemable conflict between father and daughter. Both Dimple Kapadia and Kareena Kapoor Khan, as an estranged mother-daughter pair, don’t have enough to do in the second half.

Adajania’s film, however, works because of its leading man's presence, coupled with Sachin-Jigar’s fantastic score, which largely sticks to the background and in montages. The first film sought to open our eyes to the hoops one has to jump through to get one's child enrolled in a 'good' school.

Angrezi Medium, however, falters in trying to show the same in a different world using a father-daughter relationship, while getting nowhere close to the root of the problem. It is the talents of Khan and Dobriyal you will remember as they selflessly make sacrifices for family.

The joy of seeing Irrfan Khan, one of Hindi cinema’s great actors, back on the screen again melts away any misgivings about the film.