The documentary is an ode to how through collective action, salt transforms the lives of the people of Maras, Peru.

The land of Machu Picchu and the Nazca Lines, Peru, is home to yet another treasure — the incredible Maras salt mines. Directed by Cristobal Ruiz, Thomas Silcock and Toto Thots, the documentary Añay Kachi traces the history of the salt mines and the people who have been harvesting salt there for decades.

The documentary follows a 65-year-old indigenous salt worker, Laurita, who has been working in the mines since she was 13 years old. Through her, we learn about the struggle of the indigenous people, who were exploited by the government and who ultimately, went on to own and operate their salt business through their resistance and solidarity.

The title of the film translates to Thank You Salt, and the documentary is truly an ode to how this humble ingredient has transformed the lives of the people of Maras. Salt has been harvested here for over 600 years, which even predates the Inca times and the salt mines are intertwined with the community, its culture, traditions and are literally their life source. Through their sheer will and dint of hard work, the workers went on to control the entire salt production in Maras, carving a better life for themselves and their children. 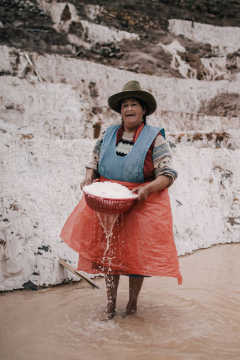 With stunning cinematography and a taut, poignant narrative, Añay Kachi takes you to the pulsating life-force of Maras, to the indigenous salt workers who live by a culture of hard work and perseverance. As one of the women says, “I work in the kitchen, I work in the salt mine. Because I still have the strength. When I am older, I’ll sit down.” The film celebrates the spirit of the community, of people who come together for a larger cause and enjoy the fruits of their labour.

The film is being screened as part of the ongoing virtual Rising Gardens Film Festival, which is being held from 16-19 April.